There’s a new Netflix series I would like to recommend to anyone who wishes to watch a feel good show and that is Sweet Magnolias. 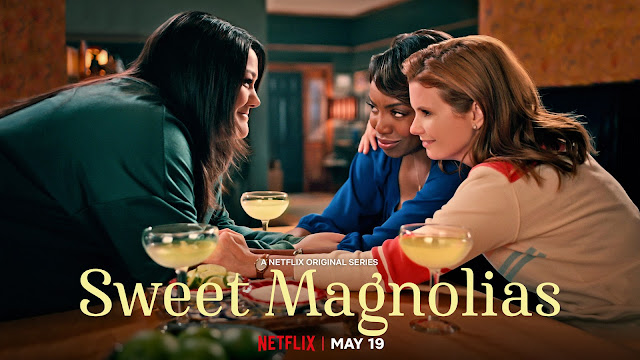 It’s newly launched on Netflix about three women who are also best friends. It follows them as they navigate their careers, family and love in the small town of Serenity. It stars Brooke Elliot as Dana Sue Sullivan (love her from Drop Dead Diva), Heather Headley as Helen Decatur and as JoAnna Garcia Swisher as Maddie Townsend. Dana Sue’s a chef and restaurant owner, Helen is a lawyer and seems to be a damn good one and Maddie was in marketing before she settled on to become a full time housewife and mom.
There are a couple more familiar faces for me in this series aside from Brooke and that would be Chris Klein who plays Bill, a pediatrician/cheating, ex-husband of Maddie and Jamie Lynn Spears, who plays Noreen, the nurse Bill cheats with who also becomes fiancee and soon-to-be-mother of his youngest child.
There’s only 10 episodes for Season 1 and I enjoyed it so much I finished watching in just two days! What did I love about Sweet Magnolias? Plenty!
1. More than anything it’s a story of friendship. They grew up together in Serenity and have remained friends up until adulthood.
I can relate to that because my best friends are also people I grew up with. I think it’s really nice when the people you call your best friends are those whom you’ve known almost your whole life. Since you’ve grown up together, you have those stories to tell about each other – the bad haircuts, the what-were-you-thinking-wearing-that fashion phase, the wow-you-were-skinny/fat way back then, those butterfly in your stomach kind of romances and the heartbreaks, death of family members, etc. I sometimes look back at those days and then this present time where we’re very much still in each others lives and I always think how lucky I am to have them.
2. I love the different fashion sense of the Sweet Magnolias. But all so stylish! I think I’m drawn to Helen and Maddie’s styles the most.
These are just of the outfits Helen wore that I love: 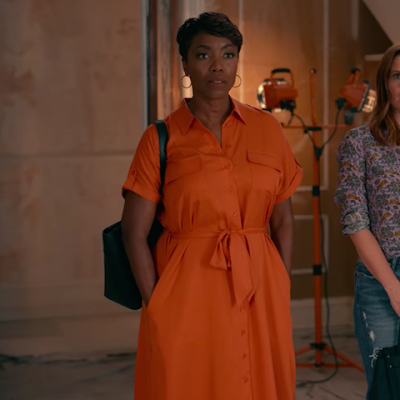 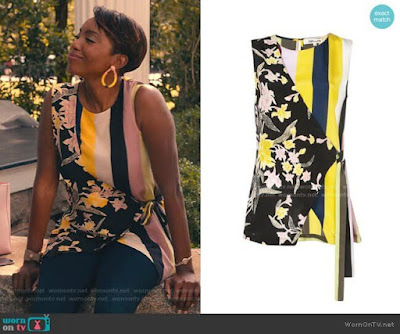 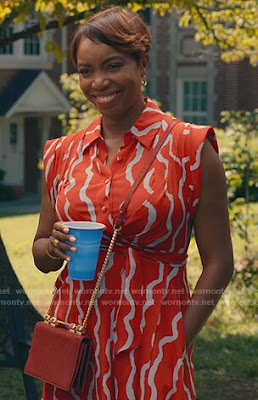 And these are just some of the outifts Maddie wore that I love: 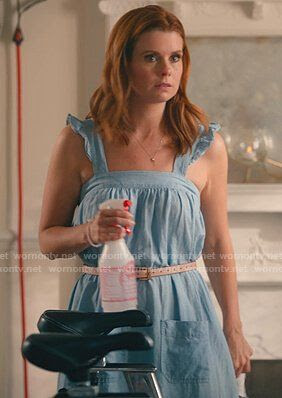 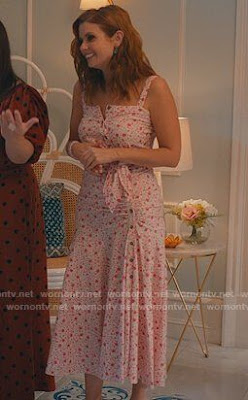 3. The soundtrack is really nice. Listen to it.
4. I love their margarita nights.
Bonding over cocktail drinks, what’s not to love? I wish my friends and I could have that too. We used to have summer travels – the three of us, Mai, Ryan and me, but we haven’t done that for a couple of years now. Maybe a margarita night or wine night can be our new thing as we catch up on each other’s lives.
5. I love the small town vibe of Serenity.
It reminds me of Gilmore Girls. Only their small town is set in Connecticut while the fictional Serenity town is in South Carolina. Like the small town Stars Hollow, everybody knows everybody in Serenity and they also have their own go-to restaurant, Sullivan’s.
Though I have always considered myself to be a city girl, I could picture myself living in a small town like Serenity living in a nice house with a front porch and a small front garden and white fences. I think that would be charming.
6. The men of Serenity are good looking and hot. 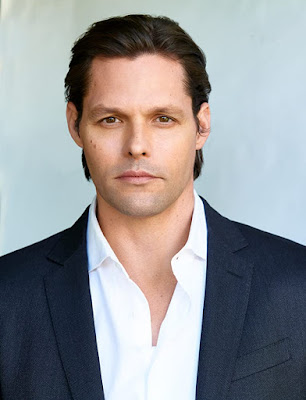 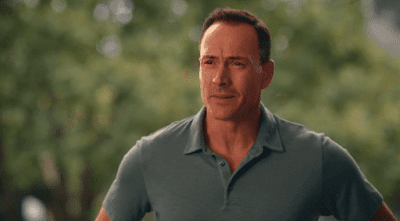 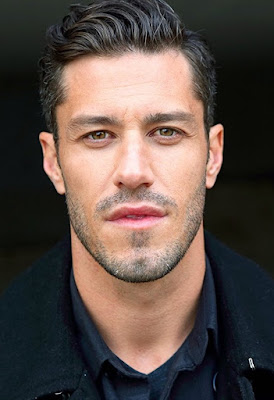 Brandon Quinn as Ronnie Sullivan, Dana Sue’s husband or is it ex-husband?
He’s the hottest of the all the men in the series, at least for me. He only appears in the last episode of Sweet Magnolias but I hope he gets more screen time in Season 2. I am intrigued to find out how their love story, his and Dana Sue’s would unfold. While it wasn’t outright said in the series, I think Ronnie not being in the picture was because he cheated on Dana Sue. So I guess cheating men in Serenity is a thing?
Carson Rowland, the guy who plays Maddie’s oldest son, Ty Townsend deserves a shoutout too for being cute. 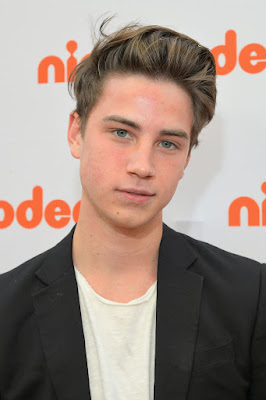 7. Life Lessons from Sweet Magnolias
“Sometimes it takes lying on the floor, not going left, not going right, to get over someone.”
“Do the storms ever stop? No. But neither do the rainbows.”
“If you feel like sitting by yourself crying, this’ll work too. And there’s nothing wrong with that. The end of a marriage is something to mourn.”
8. And of course the whole story itself is something to watch
The stories of the Sweet Magnolias characters are all interesting and I would love to know how they all unfold. For instance, at the beginning of the series, Maddie and Bill go through a divorce and throughout the series, they try to work on being co-parents to their three kids. Maddie finds new love in Carl, Ty’s baseball coach but while things seem to be doing well with the two of them (Carl is really a gentleman and he seems like a great catch!), at the end of Season 1, Noreen ends up leaving Bill, who then goes back to Maddie to ask her to try to work things out between them. Soooo there’s a love triangle right there! Who will Maggie choose? My money’s on Carl of course because well he’s just so nice and understanding and again, Bill did cheat and even got his sidechick pregnant – this after Maddie works her butt off to get him through medical school. Doesn’t deserve a second chance in my opinion.
Dana Sue says she’s not looking for a relationship and just wants to date and flirt. No commitment. She meets this good looking long haired farmer who might just give her that but her ex-husband/husband? Ronnie is back in town! Still wants to work things out with her. Another love triangle maybe?
As for Helen, well she did rekindle her romance with Ryan, someone from her past and sure things looked good with them for awhile but then major conflict was revealed – he doesn’t want kids. She does. Personally think she shouldn’t take him back anymore. Helen ought to notice Erik, the sous chef from Dana Sue’s restaurant who seems to have a thing for her. He’s not bad to look at either! Also, I am intrigued to find out whether Helen will pursue her plan of having kids through artificial insemination now that a man is out of the picture and she feels like her biological clock is ticking.
Equally interesting to follow would be the lives of the Serenity teens – Ty and Kyle, Maddie’s kids. Ty is a good at baseball which makes him part of the cool kids. But he’s got issues with his Dad for leaving them.
Annie, Dana Sue’s daughter, is good friends with Ty and Kyle though she secretly harbors feelings for Ty who doesn’t seem to notice her that way. She’s also a talented photographer who keeps an Instagram account that shows what her hometown, Serenity looks like but well shows the not-so-pretty-stuff of the town much to her mother’s dismay. She’s got her own family issues as well.
And Kyle, well he’s the one who has feelings for Annie. But he’s younger than her and again, Annie has her eyes on Kyle’s older brother, Ty. He’s also more into theatre than sports but he wishes his Dad showered him with as much care and attention as he does to Ty.
Also Sweet Magnolias – that’s Dana Sue, Helen and Maddie have started a spa business. Reminds of me of Lorelai and Suki from Gilmore Girls who also started their own charming business – a bed and breakfast inn.
These are just really some of those stories worth following in Sweet Magnolias. There’s a lot happening in just one episode that you would want to keep hitting next.
I think I highly enjoyed this drama series because it has the same charm as that of Gilmore Girls which I loved! I hope this will be renewed by Netflix because I really want to know what happens next to the characters in the show. But I guess given that we’re in a pandemic right now, I not only have to wait for Netflix to announce whether the show will be renewed, I’ll have to wait longer for this to start shooting again.
Meanwhile, if like me, you loved the feels of Gilmore Girls or similar shows, you should watch Sweet Magnolias. It’ll definitely warm your heart. As for me, maybe I’ll see if I can find the book series of the same title, by Sheryl Woods where this series was based from while I wait for new developments about this show.