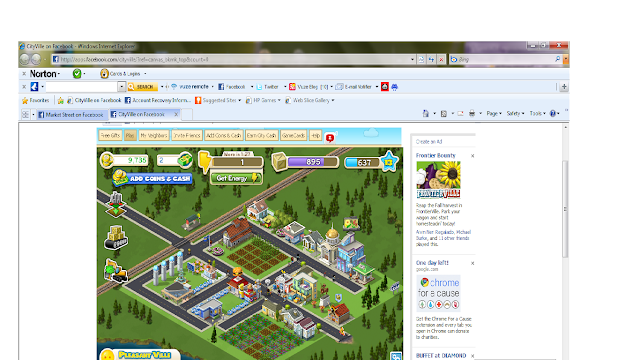 I love games! And that’s actually one of the main reasons I love Facebook. I’ve played a lot of games in that social networking site. Yes, I tried Farmville, Sorority Life, Pet Society, Be a Tycoon and these are just to name a few! So anyway, because I’m finally on break from school and work, I’ve chosen to bum around the house for awhile and what better way to actually do that than to play games online!

So I discovered Cityville just a couple of days ago and now, I’m completely hooked! The picture above is my very own city on the game. For lack of a better, more creative and more original name, I called my city Pleasantville, you know, inspired by the movie with the same name. It was only later on that I thought about renaming it Lizzieville after my name but well, I can’t change my city’s name anymore. Can it actually be changed? Oh well. Anyway, if you guys are into Facebook games as well and we’re friends, how about becoming my neighbor on Cityville? (“,) And for those who are already my friends on Facebook, forgive me because I keep sending requests to you guys but you know, you can just ignore it right? Although I wish you wouldn’t! Let’s play! 😉