Crazy over Boy Bands Then and Now

Last Friday, Ryan and I got to talking about One Direction and their Best Song Ever video which kind of spoofed some of the popular boy bands of the past. While One Direction may be the biggest, most popular and most adored by millions of screaming teenage girls and gays today, kami na batang 90s, had our own fair share of stories about swooning over those adorable boy banders who sang so well. Even more swoon worthy they were if they could dance too!

Here’s my confession: I was a huge boy band fan.

I collected magazines – local and international alike (my fave was BOP! ) that had boy band photos, posters and stories in them. I bought photos of boy bands sold by sidewalk vendors and compiled them in a photo album. And yes, my room back then had posters of the boy bands I loved plastered all over the walls. Not to mention, a collection of their music CDs, video CDs and cassette tapes.

A1, NSync, Boyzone,  Westlife and Blue – these were my favorite boy bands. But the one I really, really, really adored, loved and swooned over was the Backstreet Boys. I particularly had such a big crush on their youngest member – the blond hair, blue eyed Nick Carter. I loved him to bits! Loved, loved, loved him!

Ryan shared Kami ang Batang 90s photo of what the boy band 911 looked now on Facebook fast forward 10 years or so later (I loved the UK boyband 911 too) so I thought I’d share it here for a Then and Now blog post. I specially loved their lead singer, Lee Brennan. I thought he was the cutest guy ever – next to Nick Carter of course!

Here are the Then and Now photos of my two favorite boy bands back in the day:

I think Lee and Nick are still both good looking even now.

And if I was still a teenage girl today, you betcha I’d be one of those girls swooning over 1D. When Simon Cowell signed the group on, he probably knew they’d hit it big because One Direction had the right combination of what would make a boy band mega popular = catchy songs + good looks. 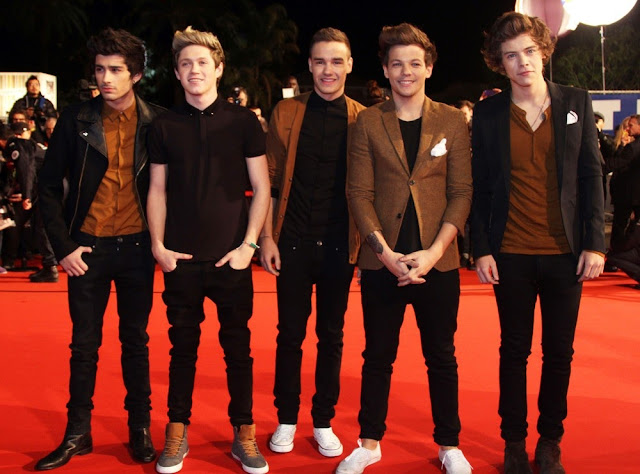 See? All very cute looking boys! And don’t cha just love their English accent? I would have to say that out of these five guys though, my favorites would be 1) Harry Styles (of course) and 2) Zayn Malik.

Anyway, I’ll leave you with these 2 catchy songs that have been running on replay in my head since Friday.

One Direction: Best Song Ever (And we danced all night to the best song ever! LSS!)

My All Time Favorite Christmas Songs to Listen to