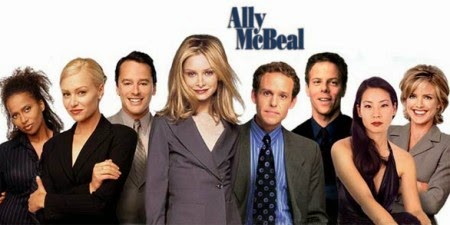 Remember when I told you about me watching Popular again? Well, here’s another TV show I’ve been watching recently – Ally McBeal. Unlike Popular though, I’m only seeing this show for the first time. My friend, Erin recommended this show to me. She said, “watch it Liz! You’ll love the characters’ lines and you’ll love the soundtrack!”

It’s not that I’ve never heard of Ally McBeal before. But when this aired, back in the late 90s, I was just about to graduate elementary school. It aired from 1997 to 2002 and that meant I was still pretty young to relate to the show anyway so I guess that’s why I didn’t watch it back then.

Ally McBeal is a legal comedy-drama TV series created by David E. Kelley. It stars Calista Flockhart as a young lawyer working in a Boston law firm with other young lawyers who lived dramatic, sometimes humorous and sometimes nutty lives.

The show was pretty successful as it lasted for five seasons and I even read somewhere that this is one of those shows that made young people want to be lawyers because they thought that’s how lawyers really lived.

I’ve only gotten around to watching 5 episodes on Season 1 (slow Internet connection prohibits me from having a marathon!) but I’m loving it. I think Ally’s adorable being the idealistic and romantic person that she is. I’m looking forward to watching more of this show.