When I was younger, I used to watch Jeopardy a lot with Dad. I enjoyed it so much that he even bought me a board game called Trivial Pursuit and then a Playstation 1 CD game of Jeopardy. I know very geeky of me. But I love it anyway. So imagine my delight when I found out about quiz nights in certain bars in the city from reading articles on Spot.ph. Quiz nights were part of their Top 40 (?) things to do in the city article.

That article was years ago but I finally got to attend a quiz night last Tuesday. 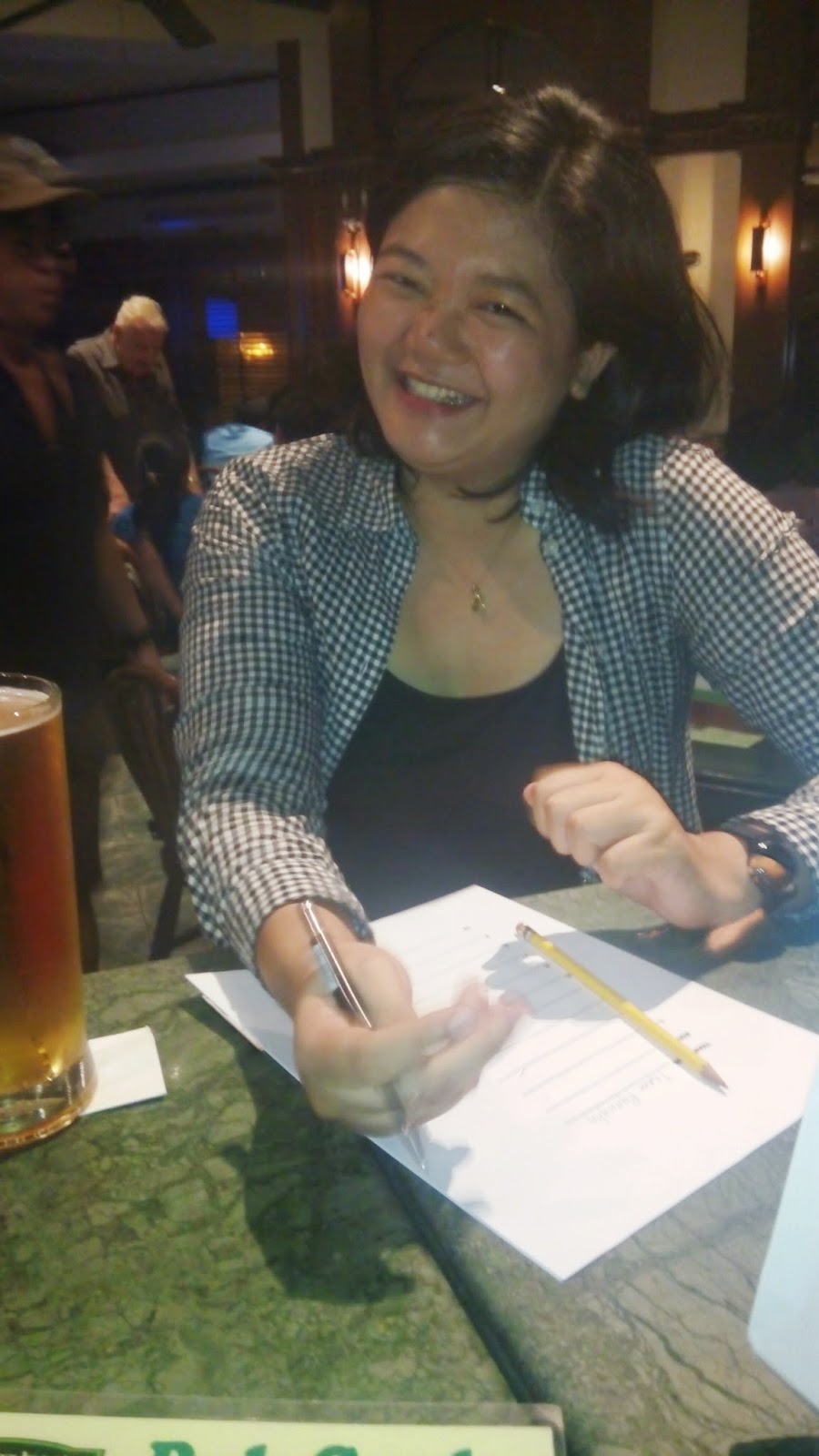 It’s all thanks to her, Ryan’s work colleague and friend, Flor Ann who’s a regular at Murphy’s Pub, Makati and who joins the quiz nights there from time to time. She’s a Communications Arts professor and a freelance writer on the side.

According to Spot.ph, most of the people who go to Murphy’s Irish Pub are expats and folks in their 30s and 40s. 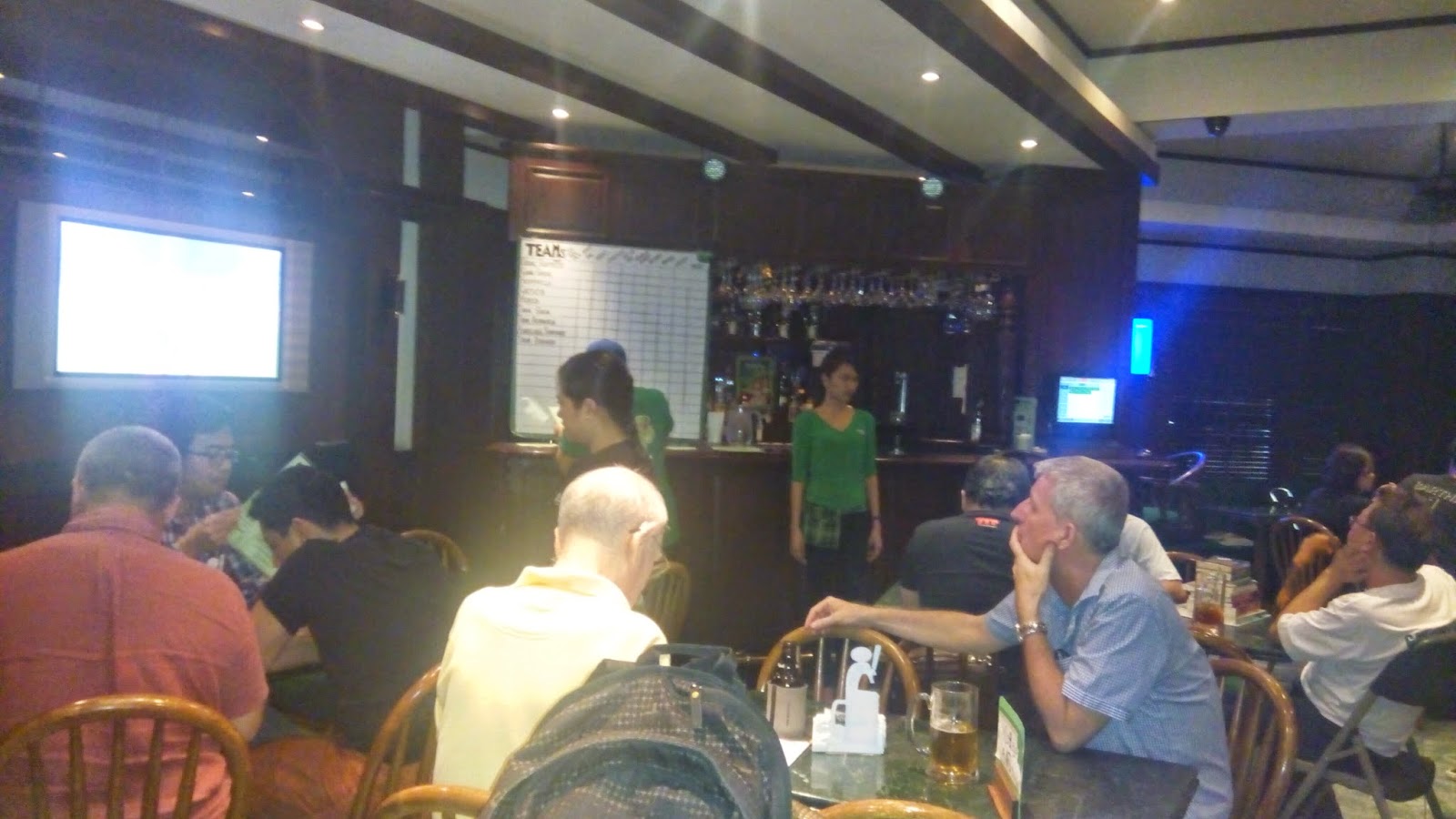 And from what I’ve seen when I was there last Tuesday, that’s true. See those two old expat guys? They’re part of the regulars at Murphy’s on quiz nights and they are usually Flor Ann’s teammates.

The quiz session starts at 8:30 PM and everyone is asked to pick a team name for the scoreboard located right over there at the bar. For lack of anything else creative, our team name became Ryaughn (That’s pronounced Rye-ion inspired by Ryan’s Instagram name. Arte lang! Ha ha!) We were also given sheets of paper which was to be where we had to write down our quiz answers. There were 10 rounds with 10 different categories. 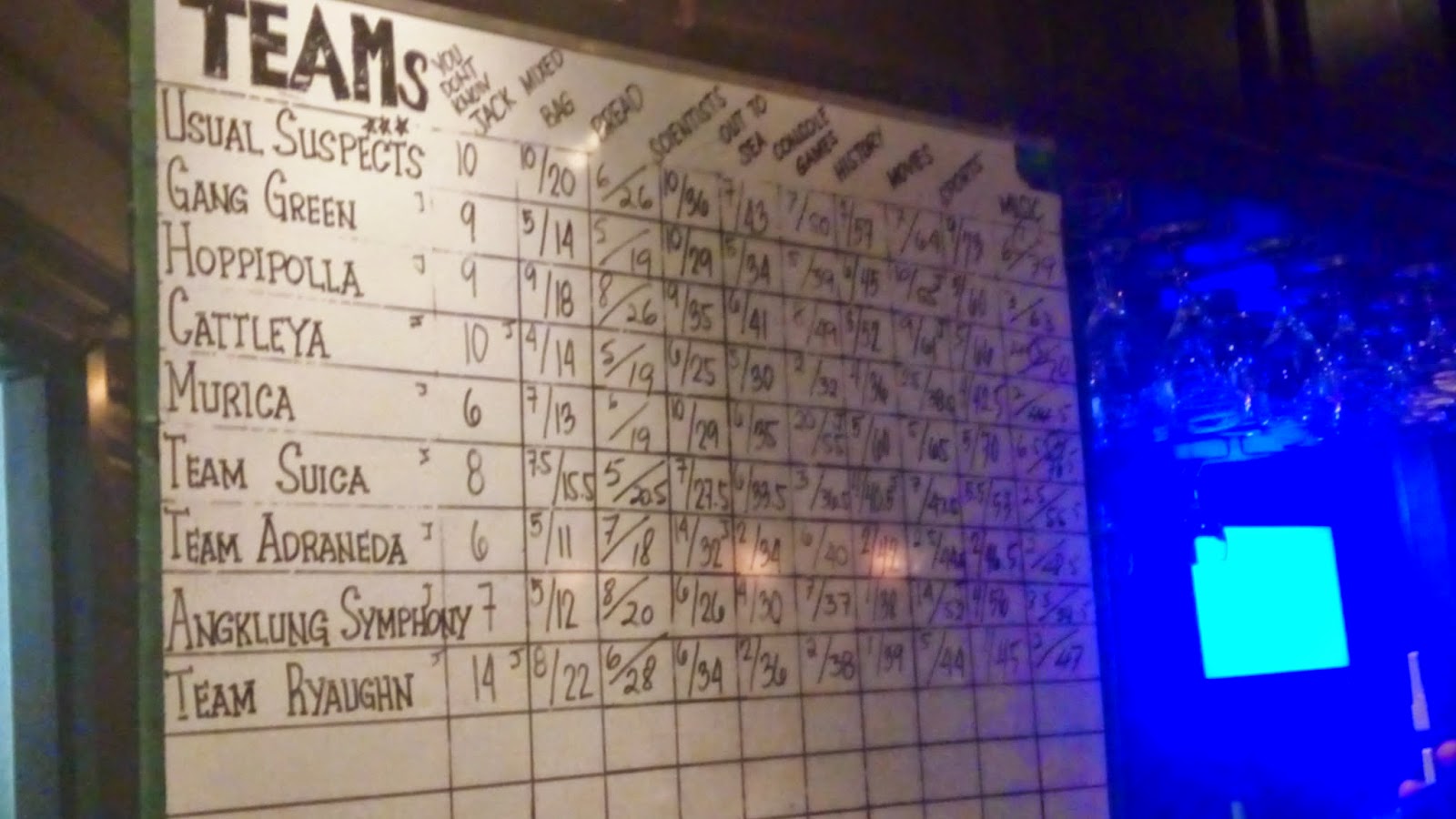 In all honesty, I didn’t get to contribute much in terms of answers during the whole quiz night. I was at a loss when it came to sports and out to sea (Note to self: study geography! And read about sports!) so during those times, I sat there with Ver who was also at a loss, eating and laughing. The hero of the team was really Flor Ann. Goodness that girl! I was amazed at how much she knew! Well, Ryan said she likes to read a lot. 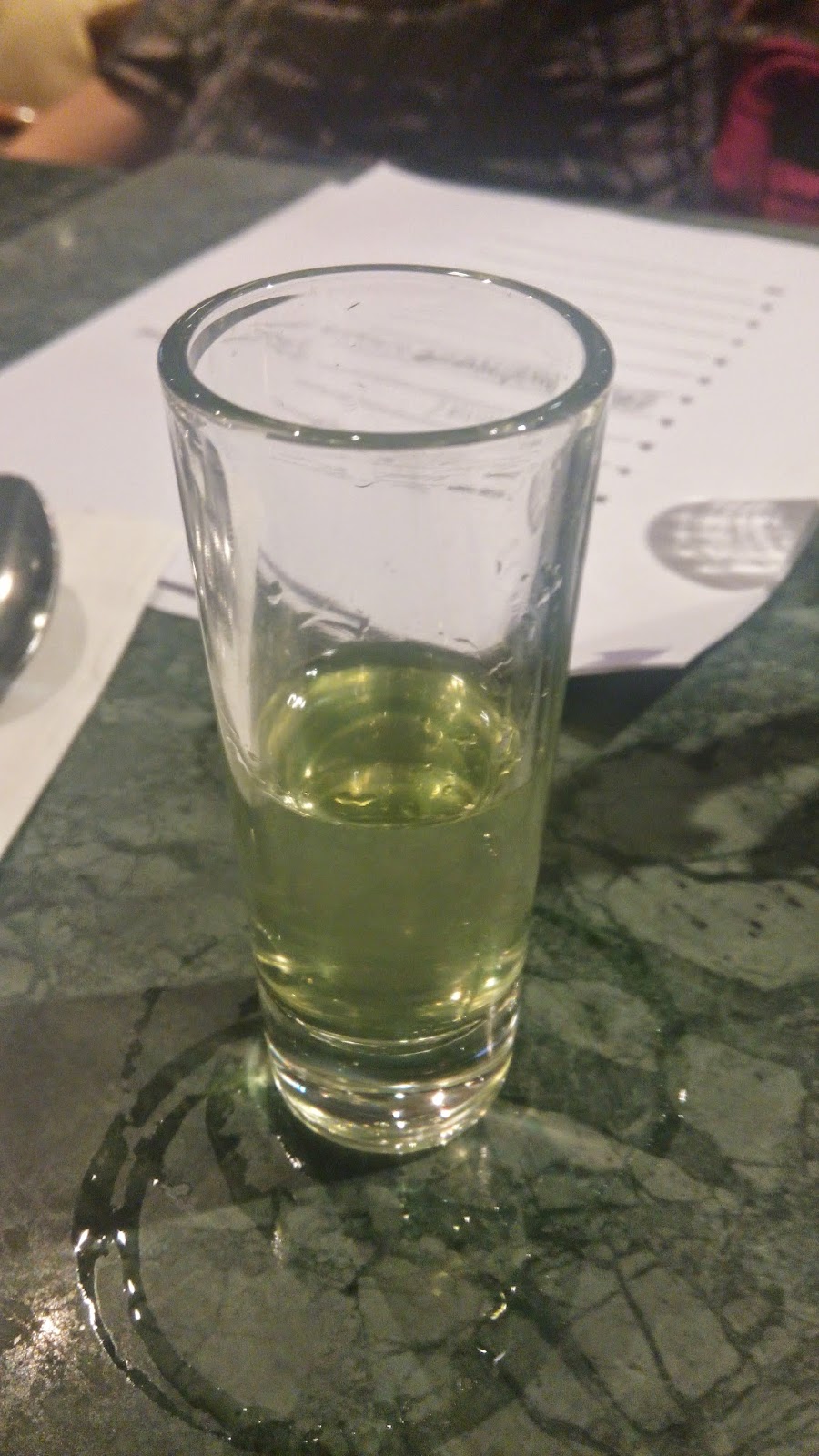 We were given a free round of tequila shots after the first round because that was the only round we ever won! Ha ha! And it was because our score was doubled for using the Joker. I actually still don’t know what that’s for. Flor Ann tried to explain it to us but I couldn’t really understand what she was saying because the quiz was ongoing.

By the time we reached the sports category, our team was all stumped so we ended up downing our tequila shots instead. When the whole 10 rounds was done, Team Ryaughn only got a total score of 47. Questions were difficult! And actually that was confirmed to us by one of the regular quiz goers there. According to him, you would know that the quiz questions were hard when the Usual Suspects team doesn’t get a score higher than 70 points. Oh well. we still had a really good time. Especially because while we wanted to be competitive, we were also there to just have fun. 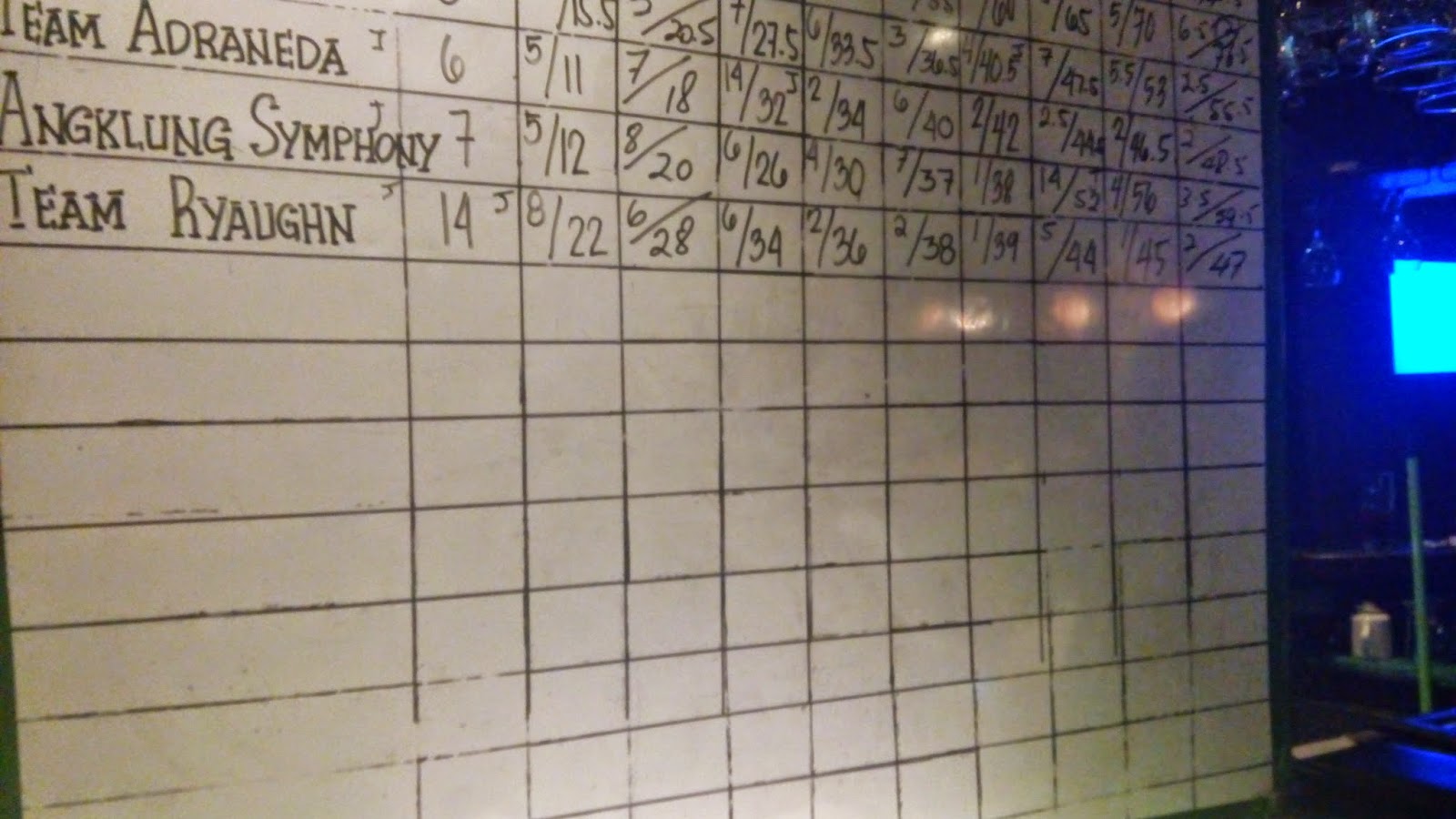 I realized though that there were some people there who are real quiz-fanatics. Even after the quiz night ended, there remained some folks who were quizzing each other and talking about the other quiz nights they’ve been to and/or are planning to go to. 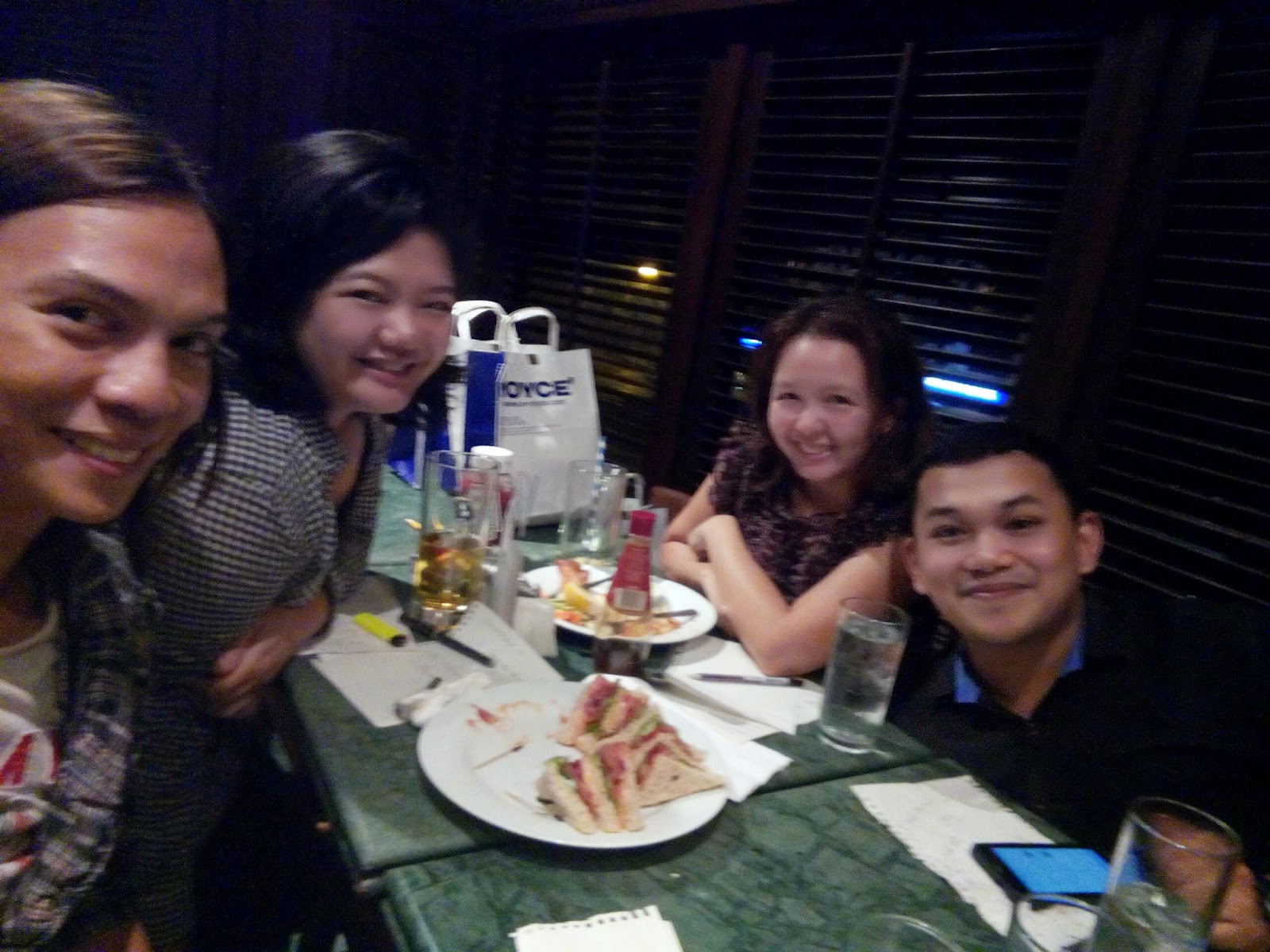 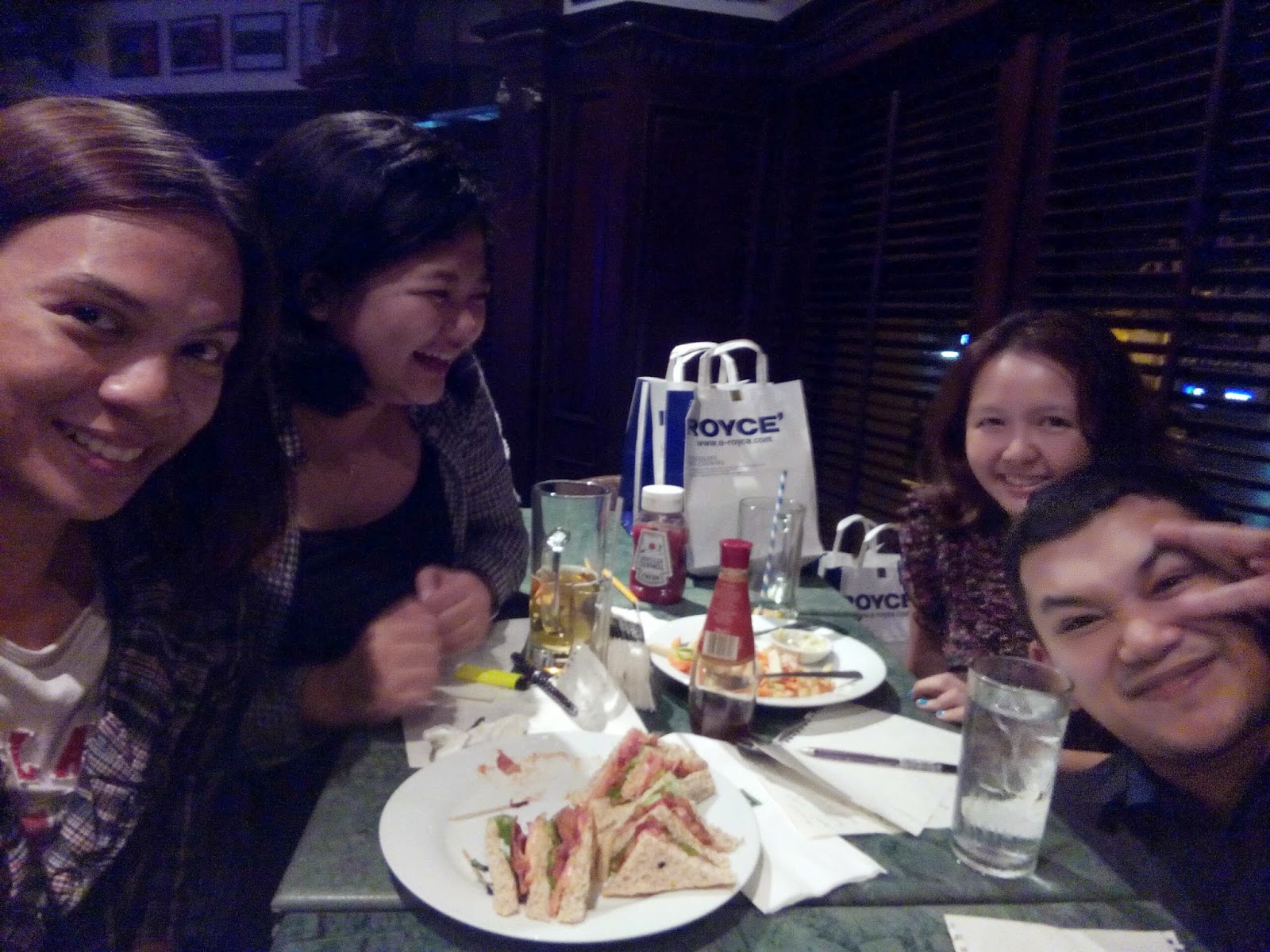 Team Ryaughn all smiles even after finishing 3rd to the last! We actually thought we might be the kulelat team. Surprisingly not. Team at the last place I read gets a free round of tequila shots as well. And the winning team gets PHP 2,000 worth of gift certificates at Murphy’s.

Will I do it again? Heck yes I would! We all would actually. Next time though, we should probably bring our A-game on which means I should be hitting the books! It would be nice to win ,right? And probably next time around, I’ll invite them to try the quiz night at 121 Bar and Restaurant in Alegro Center at Pasong Tamo Extension, Makati. I read the quiz questions there are more pop culture type – my kind of topic. Oh plus I read the quiz goers there are more our age group – yuppies around 20s and 30s. That bar’s still around right? (“,)

LIZ in the city, Murphy's Irish Pub, quiz night, Ryan, things to do in the city
Share :