Confessions Part 13: The One About Dad

Today’s confession is all about my Dad because it is Fathers’ Day after all. My Facebook news feed is full of Fathers’ Day greetings and tributes of people I know to their own fathers both living and deceased. Sadly, my own Fathers’ Day tribute now belongs to the latter category. It’s been six years since I lost my Dad to cancer which came by surprise to us all when we found out and even more a surprise that the disease took him away so fast – just about a month after.

I was close to my Dad. I would even say that I was a Daddy’s girl. A lot of the things that I liked are because of him. Let me just tell you a few things about him.

I would say that my love for reading is one of the things I got from him. I remember him having a lot of Readers Digest stacked neatly on a shelf in their room and when I was old enough to understand its contents, I would borrow from his collection and just read. My favorite part was the true stories which could be an inspirational one, a story about love or a survival story. I also liked the jokes section and the vocabulary.

When I was a teenager, my Dad used to take me to National Bookstore and Powerbooks a lot. We’d browse through different books and magazines and I’d ask him to buy me a book or two. He was the one who exposed me to reading mystery and detective story books like Nancy Drew and Encyclopedia Brown and Choose Your Own Adventure books.


He used to have a collection of movie VCDs and DVDs at home. In fact, watching movies was a favorite past time of ours. If there was a good movie showing in cinemas, you bet your boots we’d be watching and every night, when I get home, I would stay in their room and we’d just spend the hours watching a movie on DVD until my mom came in the room to say it was time for bed or until my Dad couldn’t fight off his sleepiness anymore.

I think that my Dad could give Lorelai Gilmore a run for her money when it comes to making movie references or at least, he’d be able to relate to her quips more than I can. My earliest recollection of Dad taking me to the movies was when he took me to Greenbelt to watch the premiere of Teenage Mutant Ninja Turtles and one of my last memories with Dad was us watching Mission Impossible 4 at Waltermart Makati which was the same day as the day we got the diagnosis from the doctors about how serious his condition was. I had to hand it to my father. If I was told I had only months to live, I don’t think I would be able to bring myself to watch a movie pa. But he did.

I think if my Dad knew how to download movies and if he was still alive today, he would probably have a subscription to all the streaming sites available – Netflix, iflix, HOOQ and Fox+. I think my love for all things Hollywood is also because at such a young age, most movies I was exposed to were American made.


Nope he didn’t impose the no-boyfriend-until-after-College rule with me. But he was strict in a whole lot of ways! No going to the movies until College (but I did break that rule in high school! Ha! Ha!). If I was to meet my friends, I would have to ask permission days ahead and I normally had to chat him up for a while about things under the sun before I could get around to what I really wanted to say which was “Dad, could I go out with my friends?” And that comes with all the details – where; what; when; who; why. Also when I tell him I’ll be home by 10PM, he’s already texting me at 9:30PM to remind me and ask me where I was already. Mom’s easy going. With her, it’s more like “I’m going out ma. Meeting Ryan.” Telling her. Not asking permission. Also usually can even do that when I’m already dressed to go out.

When I finally started entertaining guys, my Dad would always be asking me who it was I was talking to on the phone or chatting with over Yahoo Messenger. When I got a boyfriend, he would require him to pick me up at home. I used to dislike that because my then boyfriend disliked it too. He thought it was such an inconvenience that he had to go to my place first when his house was nearer the mall. I only realized as I got older that I was so wrong to dislike Dad for being so strict about that. I should have been angry at my then boyfriend for thinking what a hassle it was. I guess that’s part of why he was not the right one for me.

Of course I also disliked that my Dad was so strict with me when I was growing up. I used to resent it. But again as I grew older, I began to understand where he was coming from. He was just being protective. He just wanted me to be safe of course because he loves me.

He served God for half his adult life at church because he had good faith in Him. I remember him telling me that when my mom got sick he made a deal with God. Namanata sya. He told God if he cured my mother of cancer, he would join the people who annually does the Black Nazarene procession. But since he was claustrophobic, he didn’t join the crowd instead he would walk barefoot from Quiapo to home to fulfill his end of the deal with God.

He was not a religious man but he always told me that he felt His presence in his life. He told me he knew it was God that also brought him and his father together. You see my Dad never knew his own father growing up and he had always been okay with it. But one day, it seemed like God was telling him to search for his father. Turns out, his father was sick and dying and it just seemed as though his Dad was praying to see him just before he passed away.

And even when he got sick, my Dad never blamed God. He never got angry at him or questioned Him as to why he would end up being so sick.

He touched lives when he was still alive because of his faith too. I know because there’s a couple who was on the verge of splitting up then that he counselled and somehow, someway he was able to help them stay together, to remember not to give up on each other. There was also another guy who made us laugh despite our grief at church after the priest gave his final blessing of the dead. He came up to the podium, in tears just like most of us that day when we were about to bring my Dad to the crematorium, who stepped up to the microphone and said “Bakit sya pa? Marami namang iba dyan. Yung masasamang ugali.”

5. My Dad was my confidant.


I turned to my Dad for a lot of things especially for advice. When I was a kid and I was feeling lonely because I had no playmates (I wasn’t allowed to go out to the streets then), my Dad told me I should use my imagination. When I had friendship troubles, he was the one I confided in him. When I graduated, he was the one who helped me look for a job. He accompanied me to every job interview, staying in nearby Mini Stops while I interviewed and when I had work troubles and worried I might never be regularized at work, he told me I would find the right job. When my boyfriend and I broke up, he was the first one I turned to. I went home crying to him and later that day, he came to my room with my favorite spaghetti from Pancake House so I could eat. He was also the one who told me there’ll be other guys for me. No Mr. Right yet. But I’m sure my Dad’s also helping Cupid now look for that guy. 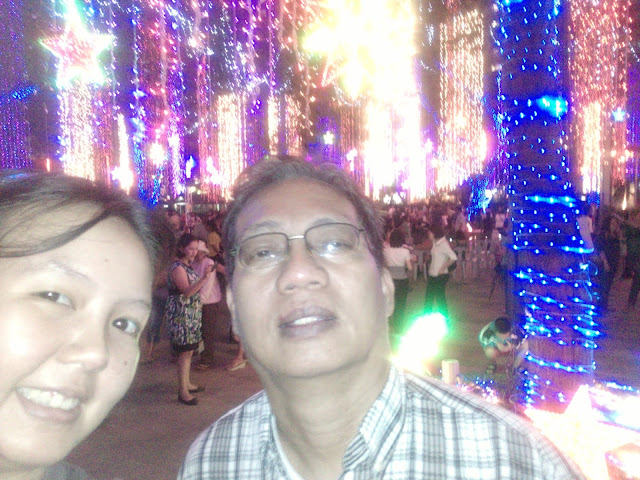 This was us at the annual Ayala Triangle Lights and Sound Show. I have not learned how to put on make up just yet and so my eyebrows are hardly seen! Ha! Ha!

I was lucky I had a father like him in my life for 26 years. I miss him of course. And I wish we had more years together. That he’d be here to meet the guy for me and walk me down the aisle when the time comes. But I know he’s in a better place now, looking down at us from Heaven.

To those who still have their Dads with them, I cannot begin to tell you how lucky you are. Treasure every moment you have with the first man in your life. Happy Fathers Day!

Recently watched: Set It Up

Another Netflix original romcom! The story about two assistants who decide to set up their bosses so they could have a life outside the office. It’s cute. Super love it. More than The Kissing Booth. I even like how they defined the difference of love and like. You like a person because… while you love a person despite of…

Also, just finished Queer Eye Season 2! What can I say? It’s still fabulous! The Fab 5 did it again! And yes, still love Antoni so much and I adore Jonathan still!

Currently listening to: Dancing on my Own by Robyn


I know it’s not new. But recently just discovered it and loving it. Yes, I find it so relatable and think it’s the soundtrack of my life right now.

I’m in the corner, watching you kiss her, ohh
I’m right over here, why can’t you see me, ohh

I’m giving it my all, but I’m not the girl you’re taking home