Top 5 Things I Loved About Netflix’s The Christmas Chronicles

Can you believe November’s almost coming to an end? Soon, we’ll really feel the Christmas season with all the parties, gift shopping and bonuses being given out! Netflix started early with their Christmas specials! Did you guys see any of it yet?

Well here’s one film I’m recommending – The Christmas Chronicles! It is such a cute and feel good movie that I think will be worth adding to your list of  movies to watch every Christmas season like  Home Alone.
The plot as written on IMDB:

Siblings Kate and Teddy Pierce hatch a scheme to capture Santa Claus on Christmas Eve. When the plan goes awry, the kids join forces with a somewhat jolly Saint Nick and his loyal elves to save the holiday before it’s too late.

What I loved about The Christmas Chronicles
1. Kurt Russell as Santa Claus
When I was a kid, my image of Santa Claus was always an old, fat and white man with white hair and beard and glasses wearing a red suit, black belt and boots. He also goes around saying “Ho! Ho! Ho! Merry Christmas!”. 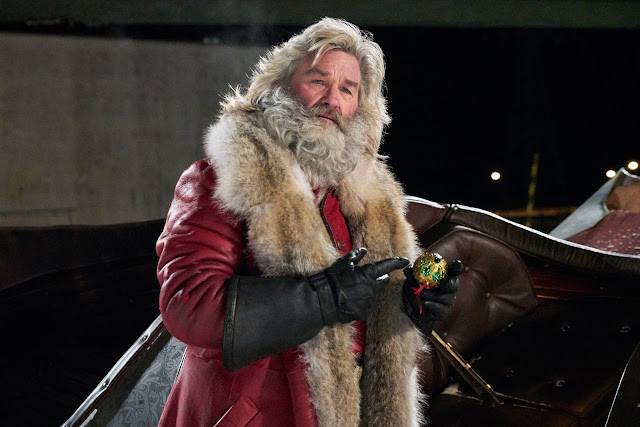 And this Santa has an inner rock star!

2. Kate and Teddy Pierce’s relationship
When I was a kid, I was like Kate Pierce. A true believer of Santa Claus. I remember how my parents would make me go to bed on Christmas eve and wake me up at the stroke of midnight, saying Santa Claus has arrived and I would go to the living room to find all the socks of my Dad which I hanged at the bar would be filled with lots of goodies and the Christmas tree would have my presents! It was such a magical time of the year for me. I think at one point, my Dad might have attempted to dress up as Santa Claus but it failed because I refused to wake up and get up from the bed. Ha! Ha! I would never know because they really never told me if they actually tried that bit.
But I did meet Santa Claus once. Well, a department store Santa Claus. It was back in the 90s when Gift Gate store was still thriving. If you weren’t born yet, that was the go-to store of the kids for all their Sanrio staples like Hello Kitty, My Melody and Little Twin Stars. Anyway, I think I may have been around 8 or 9 years old by then and my parents had me line up with all the other kids to sit on Santa’s lap for a photo opp. I remember that picture! I wasn’t smiling in that photo! My eyes were rolling as though I was trying to say “Oh please! You’re not fooling me!”  I think that was the time my parents had finally told me that Santa Claus doesn’t really exist. Boo!

Now I don’t have a sibling. But I do have an older male cousin who used to stay with us during summer and/or Christmas breaks. Like Teddy, my Kuya Neil was a non believer of Santa Claus. He was the one who told me Santa isn’t real and how I remember insisting to him that he is! When I told my parents about it, that’s when they told me that it’s true, Santa’s not real.
But you know what? It’s fun to believe that there’s a magical being somewhere out there like Santa Claus on Christmas time that’s really making a list and checking it twice to find out who’s naughty or nice. And if you fall on the nice list, he’s gonna grant you your wish or give you a present on Christmas day. Sometimes, I still make a Christmas wish to Santa. He hasn’t really granted any of my recent wishes yet though! Hmph!
3. Santa’s little helpers
Those elves are soooo cute and cuddly to look at. Also very different from the elves I had imagined when I was younger.

Don’t make ’em mad though. They can be scary! LOL!

4. It is such a heart warming story about family!
I cried watching this film, mainly because I remembered my own Dad and how I wish he was still around to celebrate Christmas with us. Missing a loved one especially on special occasions – that never gets easy.
5. The plot to save Christmas
I highly enjoyed watching the kids joining Santa Claus on a mission to save Christmas and all the shenanigans they had to go through just to do so! Anyone want to ride a flying reindeer?

Even if you’re already way past your childhood age, you’ll still love The Christmas Chronicles! It’s really for the whole family – the kids and the kids at heart. Once you do watch this, tell me what you thought of it at the comments section too!