A new restaurant just opened up in Glorietta, Makati, right beside Dekada (a restaurant I have yet to try but already heard that food takes ages to get served). Katherine’s Cafe is a casual dining restaurant that serves American and Filipino food but what’s new about that, right? There are a whole lot of restaurants that offer the same kind of menu. In fact, I’m reminded of Nono’s, another restaurant I dined in at last year. Katherine’s selling point is that they are offering diners comfort food that will make you feel like you’re home, eating your favorite dishes cooked and served with love by Nana.

The name of the restaurant is derived from the name of an imaginary little girl who delights at the idea of her grandmother cooking her food. I personally can’t relate to that because my grandmothers lived far away. But when it comes to the concept of eating comfort food at home, I think more of my mom ‘cos she cooks the best meals!

The restaurant looks very inviting and warm just by glancing at it from the outside. You’ll easily spot it when you pass by Landmark bridge to Glorietta. Katherine’s also has a sign that said it’s part of Spot.ph’s Top 50 great restaurants in 2018.


Intrigued, I invited Ryan and Dom to try dinner at Katherine’s Cafe and so off we went on a Tuesday night, after work. 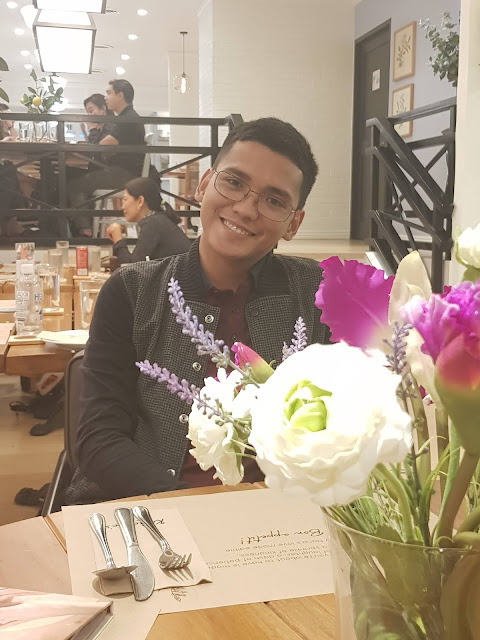 This is Dom, all smiles and excited for dinner. My other companion, Ryan, did not feel like getting his photo taken. Camera shy. LOL! The two of them make the perfect dinner companions – Ryan is the discerning type when it comes to food while Dom loves taking photos. Well, he and Ryan are great at taking food pics and I figured if I’m going to blog about Katherine’s, I’d have great food shots to share.😊

Nailing it with the Ambiance

In this day and age where people are looking for Instagrammable places, I would say, you’ll find Katherine’s belongs to that. In the words of Ryan, the sosyal way of describing the place is, it looks so shabby chic. I think it looks homey. Another way to describe it? It’s a place the Titas of Manila would be drawn to! 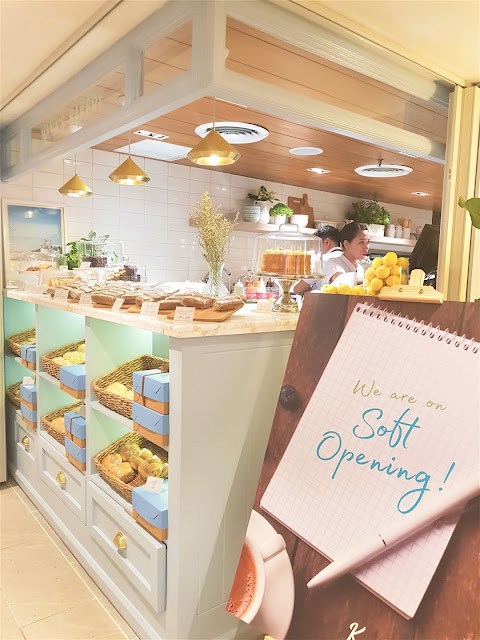 By the entrance of the cafe, you’ll find a shelf full of pastry displays. No smell of freshly baked goods though. There’s also a chic looking veranda for outside diners.

When we were led inside the restaurant, I was pleasantly surprised to find that it looks bigger than it is from the outside. In fact, there’s a small staircase going down that will lead you to more dining tables. We got seated in a round table that’s probably good for about six to eight people. Good for us and our bags! LOL!

The walls are painted cream and white. I think that’s where you’ll get the warm and fuzzy feelings brought by the comforts of home vibe from. Seriously, very charming. 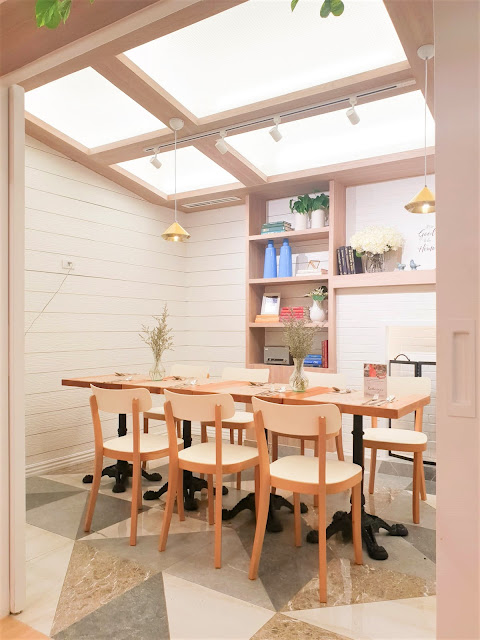 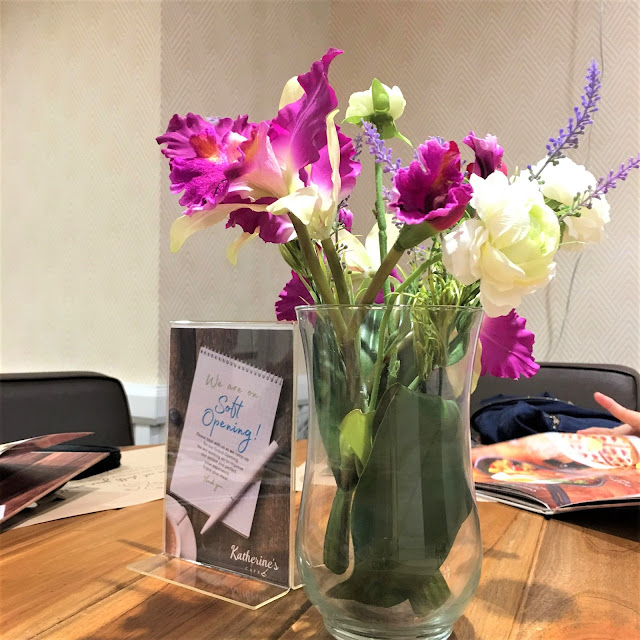 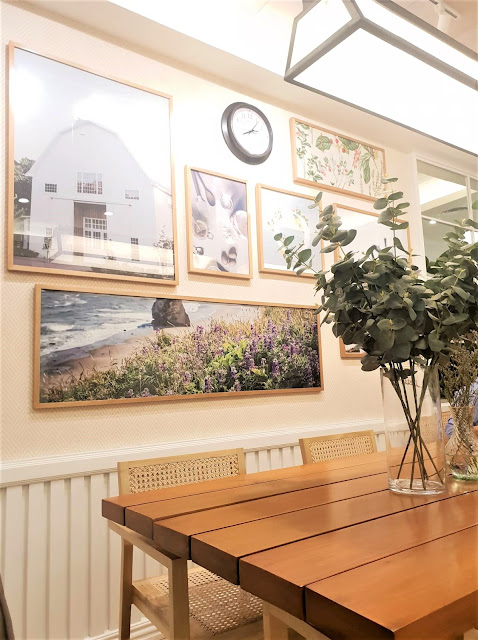 And with the wooden dining tables and chairs, you’ll get the feel of being in a country house. 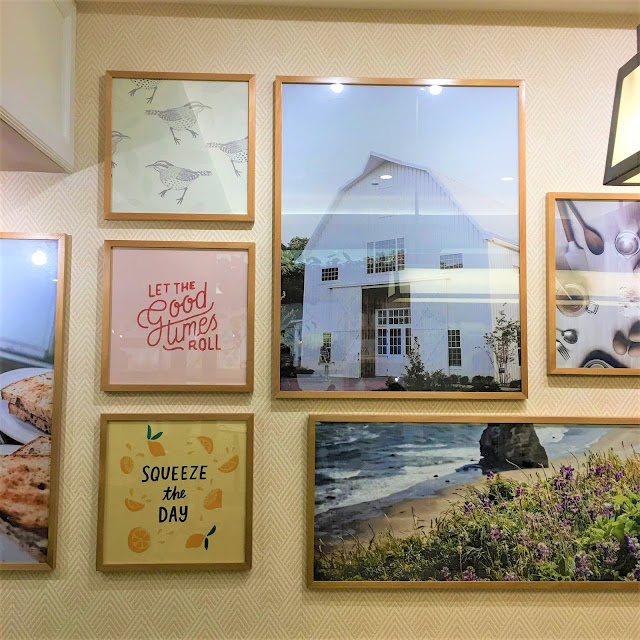 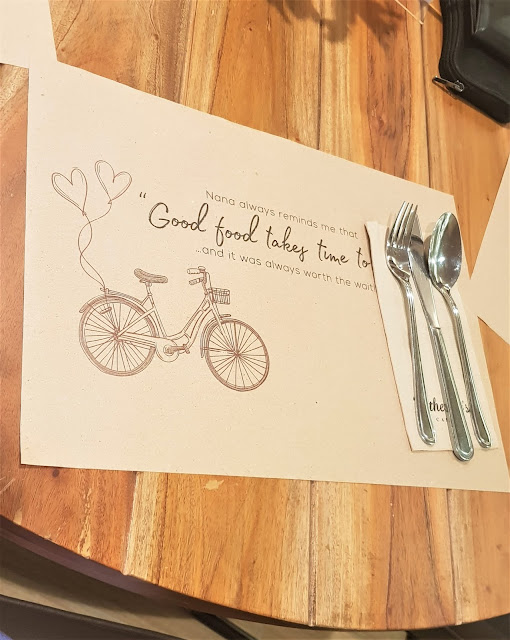 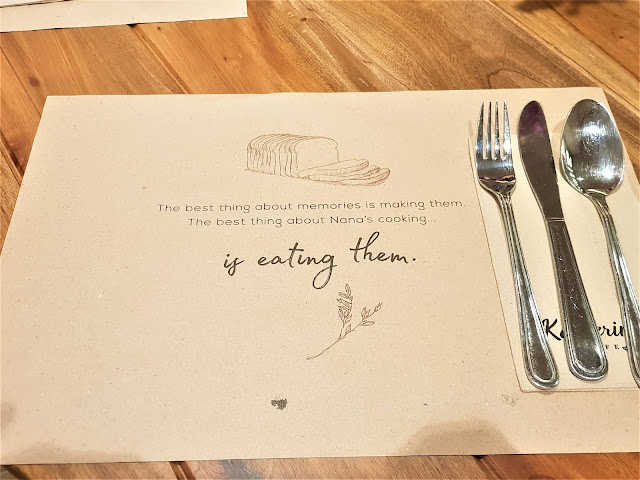 Quotes to live by? Check! 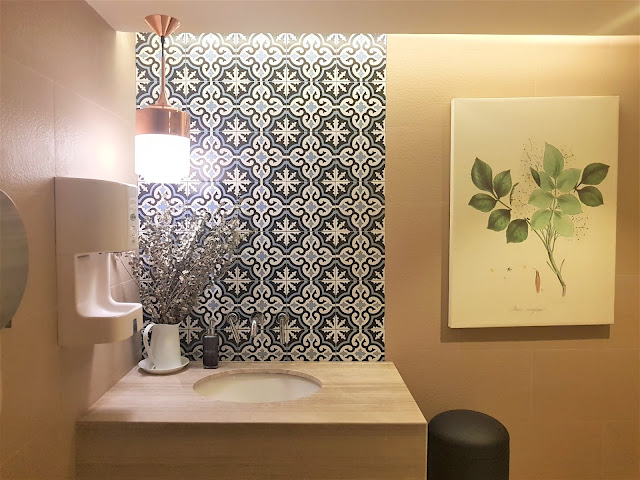 Even the restroom gives off a cozy vibe. I wish there was a mirror though!

When it comes to ambiance, Katherine’s Cafe has it down to a science and you know that a restaurant’s look and feel is an important thing when you want to invite customers in. My only gripe? There was a lot of flies buzzing around the place! And this is an indoor restaurant. Located inside the mall.

But you know what’s more important than ambiance? The food and the service of course!

Delicious to Look at 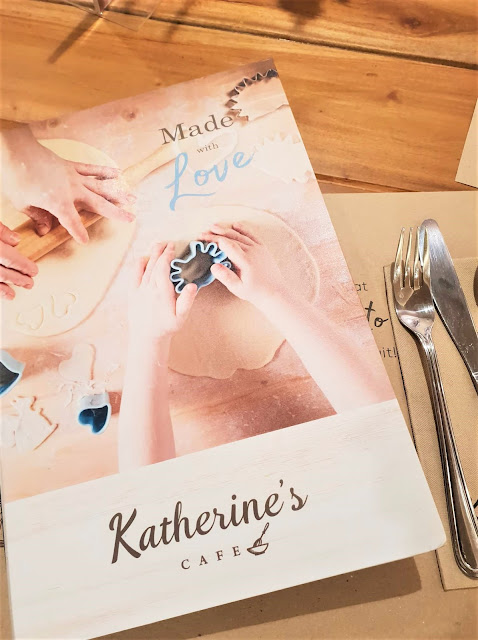 On the cover of their menu, it says Made with Love. Open it up and you’ll find so many food photos that are sure to be a treat to look at. I looked at the menu and already my mouth watered with anticipation at the numerous food items I could probably eat from Katherine’s. Comfort food at its best! 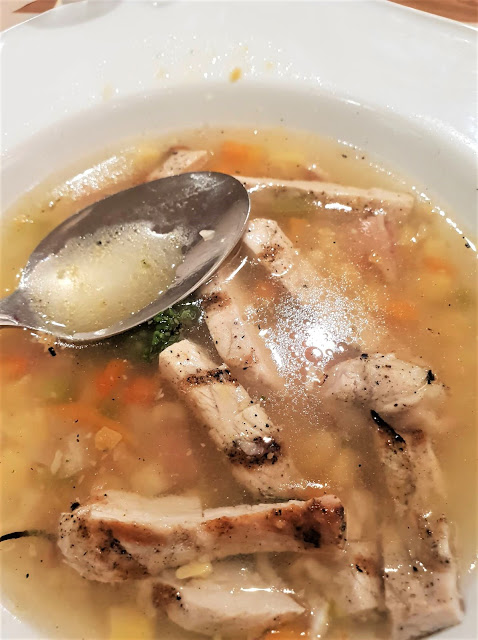 Ryan was suffering from allergic rhinitis and thought he’d start off with a tasty hot grilled chicken soup to make him feel better. But did it? Nope. Not at all. According to him, the soup was bland and cold. To make sure his taste buds are not playing tricks on him (since he was sick), he got Dom to taste the soup as well. So the soup was a letdown.

“If it was Php70, this would’ve been okay but it cost more than a hundred bucks!” Ryan quipped. 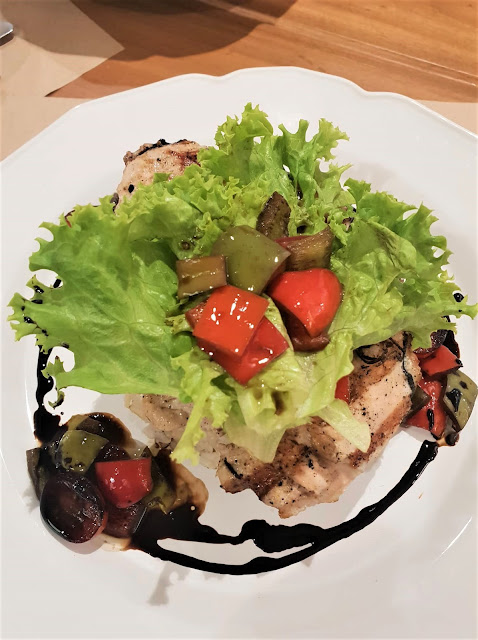 For his main, Ryan ordered the Chicken Paillard. It has brown rice, tomato and pepper salad balsamic glaze. Also looks good to eat. But it too failed to make an impact as the taste was bland. “Chicken FAILlard!” exclaimed my food discerning friend. 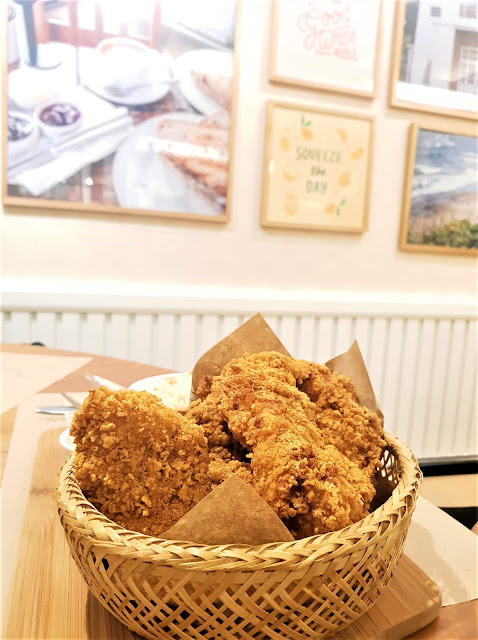 Dom like me found it hard to pick what to order when he was looking at the menu but after awhile, he finally settled on the cereal fried chicken. It’s a cereal crusted buttermilk fried chicken with choice of classic or spicy and that’s served with rice or fries and gravy. Oh the description sounds good, doesn’t it?

The texture of the chicken is okay. It’s soft enough that it won’t give your teeth a hard time chewing.  Also the serving is big enough for sharing. But Dom wasn’t happy. He said the taste reminded him of a Cheetos snack more than a fried chicken.

I ended up eating this chicken as well while I was waiting for my order to be served. For me, it’s just okay. It’s certainly not going to make you smile. Also not spicy – which is not good because he ordered it to be one. I did not taste a hint of spice in this chicken and I’m someone who doesn’t like the slightest hint of spice in her food. Did the waiter at Katherine’s forget? I wonder.

My order took a very long time to get served. How’s an hour of waiting sound like? A waiter came by our table about 20 minutes later asking if there are pending orders for us and I said, yes, the corned beef hash order. About five minutes later, I was given an update that my order was “for plating” and I thought well won’t be long now. I was starving and my friends were nearly done with their food! The waiter seemed genuinely nice and attentive so I could not help but be put at ease.

Fifteen minutes later though and my food was nowhere near arriving. I was starting to wonder how long a plating could take? The other two tables near ours were getting their orders served already and we came minutes before them. We were starting to joke that my food was still being ordered at Pancake House (‘cos they offer corned beef hash as well). You know what happened? They forgot my frikkin’ order!

How did we find out? Another waiter comes marching to our table to say he sincerely apologizes for his mistake because he forgot my order. Ryan asked him if it meant my food was not prepared yet and  the waiter confirmed it. I was given the option to cancel or they could have it rushed. I already had my mind set to eating the corned beef hash so still I said I will wait to taste this food that was now about to be rushed in preparation. So much for the for plating update.

Orders being forgotten are not rare incidents. I know it happens in a lot of food places whether the restaurant is new or not. But most restaurants though would come to you with an apology as they tell you that yes they forgot but not to worry, your order is already on the way. It’s being prepared. Katherine’s made me feel really annoyed that not only did they forget my order, they haven’t even started it now that they’ve realized the oversight.

I looked at the clock on the wall near our table and saw that it was already 9PM. Good gosh! The mall was about to close and I haven’t even eaten yet. We were there at 8PM.

You think the incident was over after I already agreed to wait for my forgotten order? Nope. Because about five minutes later, the same waiter who forgot my order comes marching back to our table asking if my order was an add on. Seriously? I know they are still on soft opening but isn’t that taking things a little too far?

I appreciate Ryan for being the one to talk to the waiter because I wanted to snap at the waiter. But I wouldn’t dare really! I don’t like to be rude to the service staff. Lucky for them really that none of us are rude customers. Others might have raised their voice at them. 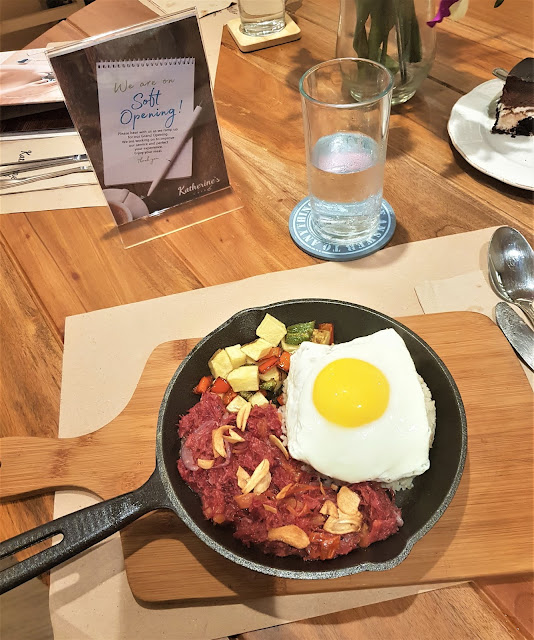 Ta-dah! And here it is, finally my corned beef hash order. I touched the “plating” and it’s still hot. Could also see hint of smoke coming from my food. However, my food is not served hot. The corned beef was just warm – like it had been sitting on the kitchen table waiting to be picked up and served for more than a few minutes already. There’s no delicious aroma of freshly cooked corned beef and garlic rice too.

Coming from their experience of being unhappy with their food, Ryan told me he bet Pancake House’s corned beef hash would taste better. You know what? He was right. The fried potatoes and the bell peppers were very dry and also bland. The garlic rice, the corned beef and even the egg tasted bland. I was so disappointed. Ryan also said “I also bet mas masarap pa dyan yung Delimondo.” I’ve not tasted Delimondo but I can tell you mas masarap pa yung Purefoods corned beef.


Ryan and I both ordered desserts before we knew what we were in for. He ordered an Ube cake while I ordered triple choco mousse cake – that’s my additional order. 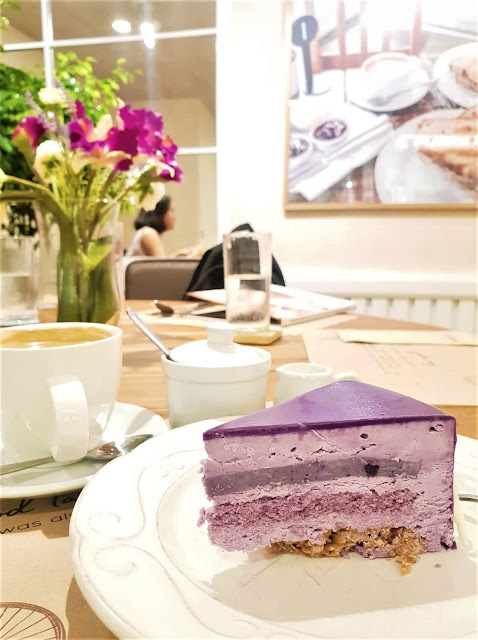 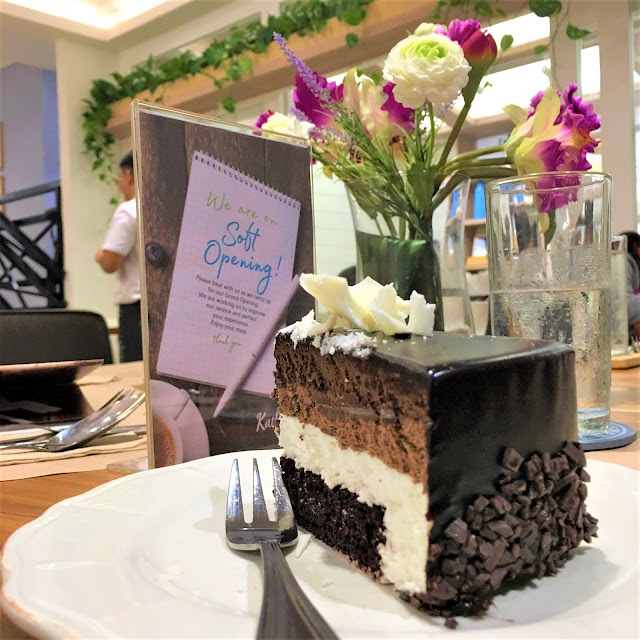 My triple choco mousse cake that came first before my main because they forgot. Again, this is just okay. While I don’t regret eating it, I also wouldn’t order it again. Desserts are supposed to make you happy. It’s sweets after all! I think Cafe Mary Grace’s Black Velvet cake is ten times better than this.


While Katherine’s Cafe has a beautiful and charming vibe to it, the food needs improvement. I feel like the food were missing seasonings like perhaps salt? For someone like me who’s not as discerning as Ryan to not be pleased with what I ate, it speaks a lot about the restaurant.

Needless to say this dining experience was a big let down and don’t you just hate it when you fork over more than 200 bucks for food expecting it to be good and you don’t get your money’s worth? We left that restaurant without the happy, satiated feeling you’re supposed to get from dining at a restaurant that serves comfort food.

I might try it again after awhile. A long, long while. Maybe then they’d have improved their service and the taste of their food.