As Highly Entertaining to Read as it is to Watch: The Devil Wears Prada

Have I told you guys that one of my ultimate favorite films is The Devil Wears Prada? When it came out a few years ago, I was just like Andrea Sachs (Anne Hathaway) fresh out of College and just about two months or three months old in my first job. I loved everything about that film – from Meryl Streep playing Miranda Priestley, Emily Blunt’s character, Emily and her snarky remarks to Andy – “Oh I’m sorry. Do you have somewhere else to be? Some hideous fashion skirt convention?” to Stanley Tucci playing Nigel, one of Miranda’s trusted employees at Runway Magazine, to the clothes Andrea wore when she transformed from Miss-I-Don’t-Care-Much-For-Fashion to Fashionista and of course the movie soundtrack (Who could forget that scene when Vogue by Madonna started playing?). I could watch that film over and over again. I even at one point secretly called a boss my very own Miranda Priestley.

I know it was based on the novel of the same title by Lauren Weisberger but until recently, once I’ve seen the film first before I’ve read the book, I’m not gonna bother picking up the book because in my head I already know the story – the gist of it at least. BUT I have just made the exemption after finding out that Lauren Weisberger
released two sequels to the book – Revenge Wears Prada and When Life Gives You Lululemon. I wanted to read both but I knew I couldn’t and shouldn’t read them before I finished with the original book.

Well, I have just finished reading The Devil Wears Prada! 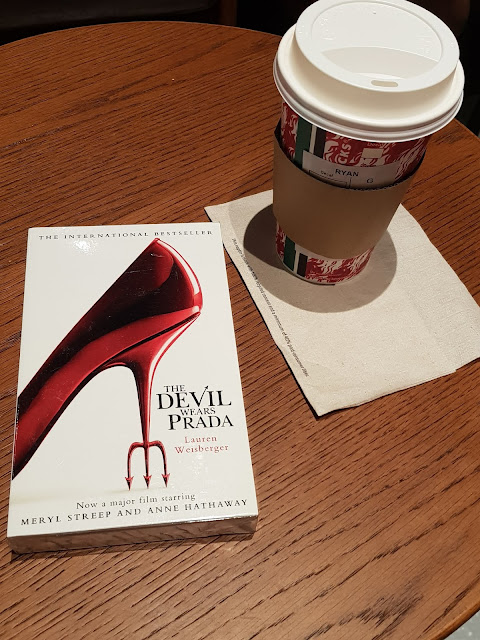 What did I think of this book? I loved it! It’s a highly amusing read that I could not put down once I really got into it.  Yes I struggled to get my reading groove on this one – not because it was a dragging at the start. Not at all! It’s just that with all the talks of fashion in this book, it made want to go shop, shop, shopping! My thoughts kept wandering to all the cute, gorgeous and fabulous clothes I’ve been seeing at the mall and online. I had to train my mind to focus and not dwell on those outfits because I shouldn’t go spending more money on clothes when I still have a lot!

Anyway, while reading it, I could imagine Meryl Streep as Miranda Priestly saying all those lines in the book and Anne Hathaway as Andrea, running around New York City in all her fashionable clothes balancing coffee and magazines in her arms while she takes a call from Miranda. I could imagine Emily Blunt as Emily too.

Now seeing that I have seen this film one too many times and have even read a few film trivias about it, discussing the comparison of the story in the movie and the book are inevitable. Here they go:

1. Miranda Priestly in the book raises her voice. The film version does not and you know what? It was such a perfect take on the dragon lady. The character is already very intimidating so even without shouting, Miranda could instill fear in people.

2. Nigel was not a big part of the book. If anything, he was merely an extra character. But I’m glad he was in the film played by Stanley Tucci. He was a big part of what made that film a great watch.

3. Andrea’s boyfriend in the book is Alex, a teacher. Her film boyfriend was Nate, a chef in the making, played by cutie Adrian Grenier. Overall, I think Alex is the better boyfriend attitude wise. He’s more understanding than Nate who sulked when Andy had to miss his birthday because of work and was only too thrilled at the idea that she wanted to quit her job when she was having a difficult day.

4. Book Emily is way nicer than film Emily although like I said, I loved her biting remarks to Andy.

5. I like that in the movie Miranda Priestly had shown a vulnerable side. I think the Miranda in the book lacked that part so it was easy to just hate her.

6. I like how both the film and the novel ended. They were both good endings in their own different ways.

Now if you have read the book or seen the movie or both, then you know that the gist of the story is that Andrea loses herself in her career. She gets to that point when everything else in her life had taken the back seat because of the job. Having been a working adult for about 11-12 years now (Wow! College was a long, long time ago!), I would say that I have learned a few things here and there – you know aside from how to actually do the job.

For instance, I understand that Andy did what she did because she wanted to achieve her dream of becoming a writer. I understand her desire to give it her all to do good at her job- even though she’s not yet living the dream of writing and actually is just deigning to do the job – because she heard that working for Runway, for Miranda Priestly for a year is a great opportunity, one that could open doors for her. If you really want something so badly, wouldn’t you want to give it your 100% too?

But I also have learned that no job is worth sacrificing the other aspects of your life too. Work-life balance is important! When I was in my twenties, I used to work a lot! As in, overtime here and there. And if I’m not working, I’m studying because I went to Graduate school too. Weekends were my only free time. Then I got burned out from all that. After two months of unemployment, I rejoined the corporate world but this time, I knew better than to just immerse myself completely with work that I had nothing else to live for. Nowadays, I remind myself that I work to live and not live to work.

Anyway, I am so glad that when I decided to finally read a book after I’ve seen the movie, I started with The Devil Wears Prada. And now my 2019 GoodReads Challenge is up 1 book, making it a total of 3 reads so far for 2019 out of the 20 I pledged to read. I have plenty of books to read as I bought a lot from when I went to the VIP Day of Big Bad Wolf Books sale happening ’til March 4 at World Trade Center. I just have to make time for reading.

My first book for 2010 and My New Gadget