Books I Read During My Vacation

I took advantage of my 5-day vacation in Siem Reap, Cambodia and the Holy Week break to catch up on my reading. Since Christmas where I was given books as gifts by my friends and the Big Bad Wolf Books sale where I found myself hoarding books, there’s now even a whole lot more piles of books waiting to be read by me.

So I finished reading a couple of books and I’m here to share my thoughts on these.

1. All Fall Down by Jennifer Weiner

What It’s All About


Allison Weiss’ handsome husband has been sleeping in the guest bedroom. Her five year-old daughter’s meltdowns will only end with promises that she can watch The Bachelor. Her father’s early Alzheimer’s has him thinking that Allison is still in college, while her once-distant mother cannot stop calling for help. Her big suburban house sits unfurnished, and the stress from her dream job is unbearable. This is Allison’s happy ending…


When she happens upon a magazine quiz about addiction, she wonders whether her use of prescription drugs is becoming an issue. Is it such a bad thing to pop a Percocet at the end of a hard day or a Vicodin after a brutal Jump & Pump class?


With a sparkling comedic touch and tender, true-to-life characterizations, Jennifer Weiner turns one woman’s slide into addiction and her struggle to find her way back up again into an unforgettable tale of empowerment and redemption.


This is my first novel by Jennifer Weiner. On GoodReads, I saw that this book got mixed reviews. Some loved it. Some disliked it a lot. Me? Well, I honestly liked it. I rooted for this heroine’s redemption. For her to kick that addiction out of her system for good. For her to get control of her life and not escape from it.

Her little girl, Ellie is a handful! I don’t know how I’d be able to handle her as well if she was my daughter without losing my cool or getting exhausted just trying. I have a god daughter who’s about three and she’s sometimes sweet but also a lot of times bratty, already she gets on my nerves so I just leave her alone with her tablet and Youtube. I have no patience with kids. I’m always like “Bahala ka dyan.” 😅  But I think Ellie’s still an adorable kid.

Her husband, Dave? It was hard to like him at first. I thought what a loser he is for resenting Allison for flourishing in her career while his stalled. I was so annoyed with this character for possibly having an affair with a co-worker instead of dealing with his marital problems. But he was able to redeem himself for me.

Allison’s mother? Another difficult woman to deal with it seemed. But just like Dave, her backstory gave her a chance to explain her behavior towards her daughter and in the latter part, she was able to redeem herself. I love her relationship with her granddaughter, Ellie too.

Addiction’s hard to deal with especially when people don’t admit that they are an addict. So kudos to Allison for learning even though it was the hard way. I think this was a nicely written book.

2. The Magic Strings of Frankie Presto by Mitch Albom 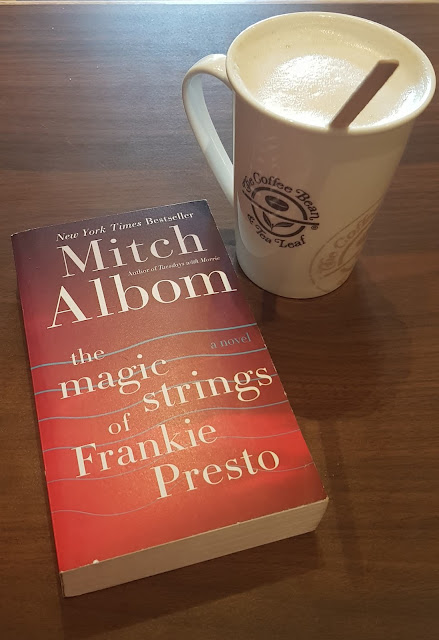 What It’s All About


Mitch Albom’s most critically acclaimed novel yet is a stunningly original tale of love: Love between a man and a woman, between an artist and his mentor , and between a musician and his God-given talent.


Narrated by the voice of Music itself, the story follows Frankie Presto, an orphan born in a burning church, through his extraordinary journey around the world. Raised by a blind guitar teacher in Spain and gifted with a talent to chance people’s lives – using six mysterious blue strings – Frankie navigates the musical landscape of the twentieth century, from the 1950s jazz scene to the Grand Ole Opry to Elvis mania and Woodstock, all the while searching for his childhood love.


As he becomes a famous star, he loses his way, until tragedy steals his ability to play the guitar that had so defined him. Overwhelmed by his loss, Frankie disappears for decades, reemerging late in life for one spectacular yet mystifying farewell.


Part love story, part magical mystery, The Magic Strings of Frankie Presto is Mitch Albom at his finest, a Forrest Gump-like epic about one man’s journey to discover what truly matters and the power of talent to change our lives.

I read this over the Holy Week. I thought what better book to read during that period than a Mitch Albom book? Having read most of his books – Tuesdays with Morrie, Have a Little Faith, The Five People You Meet in Heaven, The First Phone Call from Heaven and The Time Keeper, all of which I enjoyed reading, I expected this to be as much.

Although I struggled understanding some musical terms (since it’s narrated by music), overall I thought this was a really good read. It didn’t make me reflect like the other books did like The Five People You Meet in Heaven and The Time Keeper or make me cry like The First Phone Call from Heaven. What it did was surprise me with its twists. Oh Mitch Albom has done a fine job of writing this novel!

Also there are quite a number of memorable quotes from this book:

1. When you listen, you learn. Remember that, in music and in life.

2. As life goes on, you will join other bands, some through friendship, some through romance, some through neighborhoods, school, an army. Maybe you will all dress the same, or laugh at your own private vocabulary. Maybe you will flop on couches backstage, or share a boardroom table, or crowd around a galley inside a ship. But in each band you join, you will play a distinct part, and it will affect you as much as you affect it.”


3. Man search for courage in drink. But it is not courage that he finds, it is the fear that he loses. a drunken man may step off a cliff. That does not make him brave, just forgetful.


4. You cannot ask things to do what they are not meant to do. Eventually, they will break.


5. Music is in the connection of human souls, speaking a language that needs no words. Everyone joins a band in this life.


6. What would you give to remember everything? I have this power. I absorb your memories; when you hear me, you relive them. A first dance. A wedding. The song that played when you got the big news. No other talent gives your life a soundtrack.


7. Before newborns open their eyes, we circle them, appearing as brilliant colors, and when they clench their tiny hands for the first time, they are actually grabbing the colors they find most appealing.

Recent Read: Queen of the Babble

Judy Blume’s Deenie: All the lessons that can be learned from this novel