It's my life and these are my confessions
music screen entertainment

Friday night was movie night for Ryan and I. I convinced him to watch Begin Again, an American indie film that stars Keira Knightley and Mark Ruffalo. I had no idea what the movie was about; initially thought it may be a romance film with Mark Ruffalo in it. I loved him in Just Like Heaven. That’s how I like to remember him. Not as the The Hulk as most people probably do. Ryan tagged along because Adam Levine was in it. (“,) 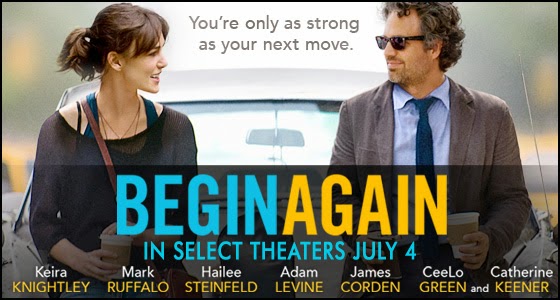 I read good reviews about this movie. And after watching it, I definitely have to agree.

The Story
Dan (Ruffalo) was a disgraced record producer and Gretta (Knightley), was a singer-songwriter nursing a broken heart after her rockstar boyfriend, Dave, cheated on her. Dan stumbles upon her performing at a bar in East Village one drunken night and he was immediately captivated by her talent. From this chance encounter grows an enchanting portrait of mutually transformative collaboration, set to the soundtrack of a summer in New York City.

Even though his character was a drunk, down-in-the-dumps, struggling on his feet kind of guy, Mark made the character still endearing. He’s someone viewers would root for. I thought Keira had a nice singing voice. And Mr. Levine, sexiest man alive, I would say not bad acting chops!

Begin Again was such a nice movie! It’s story about lost souls finding themselves again, it’s the kind of uplifting story that would make you go “Awwww” and have you leaving the cinema with a smile on your face. Plus the soundtrack of this movie is wonderful! As it would turn out, the songs were written by New Radicals frontman Gregg Alexander, Well no wonder I loved the soundtrack. I loved singing along to Mandy Moore’s Someday We’ll Know and New Radicals You Get What You Give.

Tell Me If You Wanna Go Home and  A Higher Place have catchy tunes to it and Like a Fool is such a heart wrenching song. But my favorite track is Lost Stars. Both Keira and Adam sang it well. But I’m more biased with Adam’s version – not the overproduced version because the way he sang it, the listener would know that it was coming from somewhere (may pinaghuhugutan!).
I like how the song were molded into the story and not forced into it. That’s definitely a good thing considering the music played a central role in the film. Manhattan was portrayed in the film like it was a city full of beauty and magic where a music career can happen just like that! But mix that with the main characters’ bittersweet ambiguity to the story and I think viewers can overlook that part.

These songs are definitely now on my list of playlists to follow on Spotify. If you’re looking for a good movie to watch, something different from Transformers or Dawn of the Planet Apes, I recommend Begin Again. You won’t be sorry!

Christmas Movie Must Watch: The Holiday