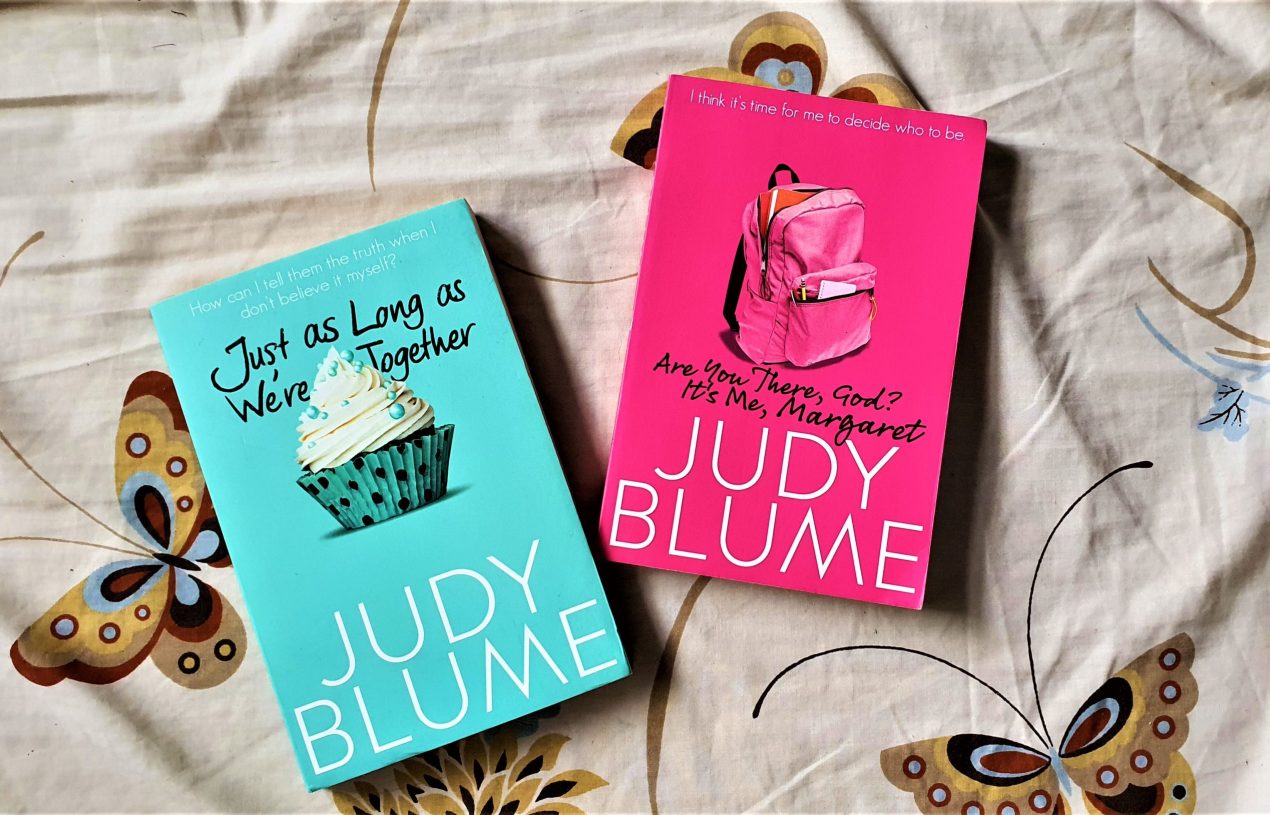 I set a new reading goal for 2022 via GoodReads. This year, I am upping the challenge to 25 books. That’s 5 more books than last year. I had a good start to my reading challenge as I was able to finish two books this month. For my January reads, I chose to read classic novels from one author: Are You There God? It’s Me Margaret and Just As Long As We’re Together. My January reading list was an ode to Judy Blume. I wanted to read three in fact, adding Summer Sisters to the list of books to read in January but well, I only got around to two!

Judy Blume’s known for her coming-of-age novels particularly that she writes them so well and so relatable! Even if the books she’s written were published way back in the 70s’ or 80s’ and even if you’re not a young adult now, as a reader you will still fall in love with her books! I know because these two books I’ll be talking about are not the first ones I enjoyed reading. Check out my review of Forever and Deenie.

Are You There God? It’s Me Margaret

So this is one of her most well-known books. It’s a commercial success but it’s also a controversial book. It’s about pre-teen menstruation anxiety, puberty, and religion. This classic book is turned 50 years old in 2020 and it’s being turned into a film!

Growing up, I didn’t have girlfriends to talk to about these adolescent girl concerns. My friends then were fleeting! It ends as soon as the school year does. Still, I recall those years when having boobs, wearing bras and having your first period were a big thing with girls in my class!

I have a vivid recollection of a girl in my 3rd-grade class who boasted of wearing a bra. She had the girls peek at her blouse to get a look. I didn’t though! But I recall being as amazed as my classmates were. And then when our teacher came, someone told her about the bra situation and she too had a look. Then she told us “Oh that’s a baby bra.”

“I must I must I must increase my bust!” chanted the girls in the book in hopes of increasing the size of their breasts. And you know what? So did a lot of girls in my school.

When I was in 5th grade, the popular girls in my class were all boasting about having their first period already. Having period and breasts were the signs that you were becoming a young woman. But while I never really shared the excitement about bras, breasts or period, I definitely had my fair share of boy crushes back then. I was such a brave young girl. I wrote love letters to my crushes!

The main plot of the book is really centered on religion which is that Margaret didn’t have any. Her mom was raised Catholic and her Dad was a Jew. But Margaret’s mom was disowned by her parents when she fell in love with her Dad so neither parent practiced their religion. Margaret was close to her grandma though from her Dad’s side and she wanted her granddaughter to be a Jew. But while the young heroine didn’t go to Sunday school or temple, she secretly talked to God. She talked to Him like you would do with a friend. Maybe she didn’t belong to a particular religion but she had her faith. And isn’t that the whole point anyway?

Just As Long As We’re Together

This is another young adult novel of Judy Blume. Just like Are You There God? It’s Me, Margaret, this story also tackled some of the issues that kids growing up encounter. Boys. First period. First kiss. Parental issues – Alison’s adopted. Rachel’s parents are separating. But the main theme of the story centers on friendship.

Stephanie and Rachel have been best friends forever. And then Alison arrives. She’s the cool new girl and she’s fun. Everybody liked Alison. Especially Rachel’s best friend, Stephanie. How can Rachel compete?

As I was reading this book, I thought to myself, maybe at one point in our young lives we were like Rachel and Stephanie. I know I was!

I had my first real friend – you know the kind that stuck around long after the school year has ended – back in 6th grade. She and I bonded over our love of Nick Carter and so she and I became inseparable then. Yep, best friends. But during our freshmen year in high school, I started having friends other than her. Unlike Stephanie and Rachel though, our friendship ended by the time we hit sophomore year because she couldn’t stand the idea of me hanging out with others. I cried over losing a friend.

And in my senior year in high school, I became just like Rachel. You see I was classmates with one of my friends and I thought how awesome it was to have her around. I’d have someone to hang out with all the time! I know I even got my friend to join the same school clubs as me. But when she started hanging out with other friends in school, I was jealous! I resented her for being such a social butterfly then because I wasn’t! I was the shy girl who kept to herself. My Dad told me though that I had to let her be. He said if I didn’t let my friend hang around other people, I’d be stifling her and I’d only lose her.

It’s not to say of course that as adults don’t have friendship issues anymore especially since we meet more people along the way as we venture out into the world. But I think thirty-something me deals with friendship issues a little more differently than teenage me. I know I’m not afraid to cut out people from my life these days when it calls for it. Or that now I accept the fact that sometimes people grow apart and that’s okay too. Not everyone’s meant to be in your life for the long run. As the saying goes, “People come into your life for a reason. A season or a lifetime.”

I’m glad I started out the year with an ode to Judy Blume. Her books don’t fail to make me feel all warm and gooey inside, remembering days of my own growing-up years.

Books I Read During My Vacation

To All the Boys I’ve Loved Before book series review

Recent Read: Queen of the Babble