Last weekend, my plans to go out fell through because Ryan was sick so I decided to embrace an introvert weekend, catching up on my reading. A friend raved about author, Rainbow Rowell and so among the endless list of books that I could possibly read, I chose one of her novels. 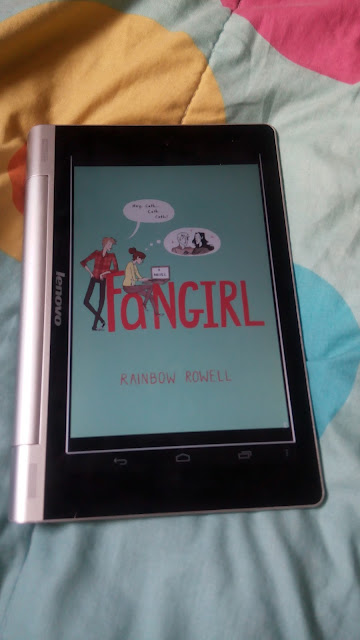 The plot: Cath is a Simon Snow fan.

Okay, the whole world is a Simon Snow fan…But for Cath, being a fan is her life—and she’s really good at it. She and her twin sister, Wren, ensconced themselves in the Simon Snow series when they were just kids; it’s what got them through their mother leaving.Reading. Rereading. Hanging out in Simon Snow forums, writing Simon Snow fan fiction, dressing up like the characters for every movie premiere.Cath’s sister has mostly grown away from fandom, but Cath can’t let go. She doesn’t want to.Now that they’re going to college, Wren has told Cath she doesn’t want to be roommates. Cath is on her own, completely outside of her comfort zone. She’s got a surly roommate with a charming, always-around boyfriend, a fiction-writing professor who thinks fan fiction is the end of the civilized world, a handsome classmate who only wants to talk about words… And she can’t stop worrying about her dad, who’s loving and fragile and has never really been alone.For Cath, the question is: Can she do this?Can she make it without Wren holding her hand? Is she ready to start living her own life? Writing her own stories?And does she even want to move on if it means leaving Simon Snow behind?

It was an overall okay read for me. Just okay. Maybe because I couldn’t relate to the adolescent and adult struggles the heroine had to face. I had no problem adjusting in College because Erin went to the same school as I. We shared the same classes and unlike Cath’s sister Wren, we did a lot of things together. I didn’t have a fragile Dad or Mom either. Though my heart did go out to her on that matter. I mean, it must be hard to be young yet have to worry about your parent constantly because he’s so fragile.

Mostly I related to Cath being a writer. When I was in high school, I too wrote fan fiction about the Backstreet Boys, mostly about Nick Carter of course and Roselle Nava. Ha! Ha! That was really because of my friend, Erin, who’s also a big fan of BSB and shared the same affection as I did with Nick. It was her idea to write about Nick and Roselle – an idea she got because when BSB first visited the Philippines, they appeared on ASAP (at least I think it was ASAP or whatever the Sunday variety show was called back then on ABS-CBN) and Roselle was the one that interviewed them. Nick playfully put his arm around her shoulder because Brian dared him to.

While I didn’t have a problem letting go of writing about Nick and Roselle, I did – actually still do –  struggle with writing. Sometimes I struggle with openly sharing the stuff I write. I used to not blog a lot because of that reason. Now though my biggest struggle is about finding the time to actually sit down and put my ideas in writing. I actually dream of writing my own novel. But alas, that’s just a dream for now. How I make it happen is up to me.
This year, I challenged myself to read 24 books. How am I doing so far? Already past half the year and I’ve only read 5. Way, way, way behind.