Two years ago, Netflix announced that my favorite Archie Comics was going to be turned into a series called Riverdale, a bit edgier, serious and dark. With the show being a hit, it didn’t come as a surprise that Netflix would want to follow that up by creating another show, now based on Sabrina, the teenage witch also from Archie Comics.

This time around, Netflix’s newest original series, Chilling Adventures of Sabrina took a different approach by going down the dark side. I went to watch it of course to see if it would be good. And you know what? It didn’t disappoint me at all!

After a serious weekend of binge watching, I personally think this is going to be better than Riverdale. Let me tell you what I liked about the show:
Sabrina

I love Kiernan Shipka as Sabrina Spellman. She’s got that look to her – innocent but can be a bad girl too. Watch the subtle change of Sabrina’s looks from Episode 1 to Episode 10. Kiernan’s best known for her role as Sally Draper from Mad Men.

Oh Harvey aka Ross Lynch in real life. He’s such an ideal boyfriend – kind and so loving and not afraid to tell Sabrina how he feels. He’s also very supportive and cute to boot! Even after finding out her secret, he still loves her. *heart melts*

In the comics, at least the funny Archie comics (not the The Chilling Adventures of Sabrina graphic novel), Cousin Ambrose is portrayed as a fat older guy who lives with Sabrina and her aunts. He’s not given much role in the comics but in this new series, Ambrose is the warlock cousin who’s very supportive of Sabrina. He’s not only given a whole lot of on screen time, he’s also really easy on the eyes. I went and Googled him of course and found out that he’s a new actor, Chance Perdomo.


If Harvey is the ultimate good guy, Nick is the exact opposite. He’s a warlock who studies at the academy and he’s very passionate about magic. He is portrayed by Gavin Leatherwood, another cutie to look out for. 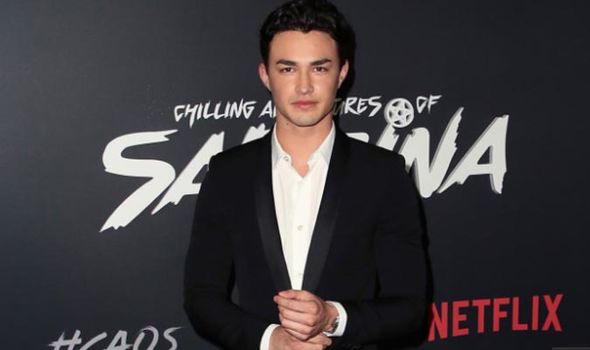 I Smell A Love Triangle

I have a strong suspicion Nick Scratch’s got feelings for Sabrina Spellman! And you know what? Even though I adore Harvey and think that he’s the best boyfriend in the world, I still would like to see Sabrina getting together with Nick! Perhaps it might happen in Season 2? The second season’s already underway! *freaks out*

I read that Sabrina’s life’s taking a very different turn in Season 2. I would not be surprised if she did get together with Nick then! Just how they left it at Season 1 gives me that hope that they just might! Who’s team would you be on? Team Harvey or Team Nick?

I can’t wait for the new season to air! But while there’s no announcement yet from Netflix as to when, the good news for fans like me is that there’s going to be a special episode called A Midwinter’s Tale that will be available by December 14. Definitely going to watch that.

If you haven’t seen Chilling Adventures of Sabrina yet, then I urge that you do! It’s really good!

RPatz in The Haunted Airman

Amazon Prime Series to Add to Your Must Watch List