All The Things I Thought About Watching YOU on Netflix

One of the shows I watched over Christmas holiday break was YOU on Netflix. It’s an American thriller series that stars Penn Badgley as a charming bookstore manager that develops a crush that turns into an obsession with an aspiring female writer he crosses paths with.

When I first saw the trailer, I knew it had to go on my must watch list. It is Penn Badgley after all whom I somewhat adored as Dan on Gossip Girl (I’m still miffed at the series creators though for making him Gossip Girl!). The series was originally aired on Lifetime channel in September of 2018 but  I don’t have channel available on cable. Luckily, my favorite streaming giant, Netflix brought it on their site!
So I spent a day binge watching YOU. If you haven’t seen the show and want to, I have to say there are spoilers to this. Proceed with caution.
Here are what I thought of the show:
1. Penn Badgley played that broodingly charming yet sinister bookstore Joe Goldberg perfectly!
Maybe his role as Dan Humphrey in Gossip Girl prepared him for this role. His character was a brooding writer in GG who also pined for a beautiful girl, Serena. Only difference might be that Dan didn’t go killing off people. So honestly, it was sort of hard to fear Joe even though I know he’s kind of a psycho. I just couldn’t help but like him. He’s not only good looking but he does have some endearing qualities too like how much he cared for Paco, his kid neighbor. Parang I wouldn’t mind ata being stalked by Joe Goldberg. Ha! Ha!
2. Guinevere Beck had it coming.
Sure, Joe stalked her and she did meet an unfortunate end but I don’t think of her so much as a victim. Maybe this is an unpopular opinion but she did have it coming to her. She did go out of her way to get Joe back.
3. Shay Mitchell is one hot best friend.
Shay played the rich and protective best friend of Beck, Peach Salinger, in this series. Just check her out in this night gown outfit holding a gun. I was for a time rooting for her to find out just how twisted Joe was so she could get her best friend away from him, the psycho. I liked how she was such a strong character in this series too. 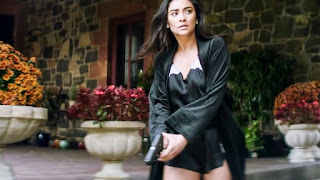 4. What a twisted plot!
Joe’s not the only one with an obsession for Beck! I was surprised to find out that Peach had the hots for her best friend too. The things she did to try to get Beck’s time and attention away from Joe and all to herself, so twistedly smart but also so very manipulative! Imagine going to the extent of faking your own suicide just to get your object of affection’s attention!
I highly enjoyed her face offs with Joe and was sort of rooting for her during their final showdown with that gun.
5. There’s some Joe Goldberg in all of us.

In the series, an obsessed Joe was able to easily find out so much about Beck’s life just by searching for her online. Let’s admit it – in this day and age of social media, whenever we want to find out about someone, we Google them. We find their Facebook. Their Twitter. Their Instagram. Their Tumblr. So many information we can find just by going online these days unless of course your person of interest isn’t big on the whole social media thing.
6. How much digital footprint do I have?

This is really the thing that you’d be concerned about when you watch YOU. You’d wonder just how much digital footprint do you have? Personally, I do have this blog where I share bits of myself and except for Facebook which is set on Friends Only, my social media accounts are on Public. I am easily searchable online. I leave out personal information of course.
7. I want more of YOU!
The ending was left on hanging with the return of Candace, Joe’s ex-girlfriend whom I presumed was dead. Killed and buried by Joe. But turns out, she’s very much alive! Also, Paco, his kid neighbor, was the last to see Beck alive before he moved away so Joe’s not completely in the clear! He’d framed Dr. Nicky, Beck’s psychiatrist and ex-lover for her death and he had been arrested but will Paco tell the police what he had seen? What happens with Joe from here?
I did search for news about YOU’s season 2. The good news is there will be a season 2 and it’ll be streamed exclusively on Netflix now. It’s also in production already so there will be more of Penn Badgley as Joe Goldberg. Yay! There’s no date of release yet though but maybe it’ll be shown later in the year like Season 1. Well, I’m definitely going to be on the lookout for that.
Have you seen YOU? What did you think of it? Are you as thrilled as I am that it’s been renewed for a second season?

Movies to Watch this Christmas