by Liz
No Comments
0 Like
“You’re nothing but a second rate, trying hard copycat!”

Whether you’re a millennial, a Gen X’er, older or younger than either, if you’re Pinoy, you’re most likely familiar with that line uttered by Cherie Gil as Lavinia Arguelles. And one would not forget that right after saying that, a glass of water was thrown on Sharon Cuneta’s character, Dorina’s face.
I was late to work today because when I opened the TV this morning, Bituing Walang Ningning was showing on PBO. I was fully intending to do another CSI or Gilmore Girls rerun on Netflix but my mom wanted to watch this classic film so I watched with her and got completely hooked. LOL!
It’s my first time ever to actually see the movie. Thank you cable TV! Ang ganda pala niya! 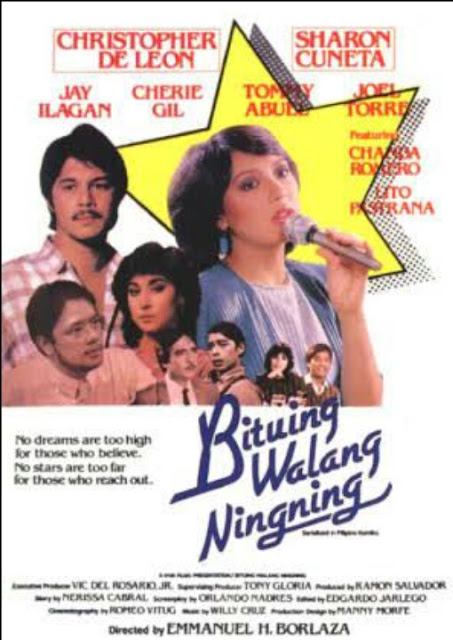 Cherie Gil really played the kontrabida role perfectly and Sharon, loved her as the mega fan turned singer who’s primed to take over her idol’s throne. Loved her even more when she toughened up and got her revenge, throwing that glass of wine or was it water? on Lavinia’s face when the latter tried to humiliate her once again with that act.
“Amanos!”

This is a really old film! You could usually tell by the fashion and the hairstyles. But another telling factor? The dialogues. Listen to the way they talk. Nobody talks like that anymore.
I know the song, Bituing Walang Ningning, since it was sang by Sarah Geronimo when she played the role of Dorina Pineda in a teleserye produced by ABS CBN. Never saw that though. Wonder why I didn’t? Since I saw the movie this morning, I have it stuck in my head in repeat. Super LSS!
“Balutin mo ako sa liwanag ng iyong pagmamahal. Hayaang matakpan ang kinang na di magtatagal. Mabuti pa kayang maging bituing walang ningning kung ang kapalit nito’y walang paglahi mong pagtingin.”
Although aside from that song, I liked Sana’y Maghintay ang Walang Hanggan. I am not a fan of Sharon Cuneta, the singer (mainly because di ko generation!) but hard not to like her singing in this movie!
Well aside from the main plot of fan turned rival singer, there’s a love story in this movie. Christopher De Leon plays the love interest, Nico Escobar. It’s actually a love triangle because Joel Torre is also in this movie as musician and composer, Garry Diaz, who’s in love with Dorina.
Unpopular opinion – BUT I liked Garry more. Parang insecure si Nico for me. I mean, the guy helps Dorina reach fame because he wanted to take down Lavinia from the spotlight so he could reach her. How selfish?! Pure self vested interest. And in the end, Dorina had to choose between love and career. Garry, on the other hand, was always just supportive of her. He understood her love for music. And like he said in the movie, he’s very independent so I think if Dorina chose to be with him instead, she wouldn’t have to give up her career.
I mean, WHY? Why does she have to choose one or the other? Why can’t she have both? Ang violent ng reaction ko. LOL! But okay. To be fair, the movie was set years ago so I forgive the traditional view of women replacing their profession with love. Times were very different. Also, I forgive because Dorina made the choice and he didn’t force her to. Plus she did seem happy with her choice. So Lavinia gets the spotlight. Dorina her man. Everybody’s happy!
My mom though… may pagkahopeless romantic din pala. LOL!
Me: *reacting violently to the idea that Dorina had to choose between her career or love*
Mom: Syempre anak. Pipiliin nya si Nico. Mahal nya yun e. Di naman nya mahal si Garry. Ikaw ba dun ka sa taong di mo mahal?
Me: I’m just saying ang selfish ni Nico. Bakit kailangan magsacrifice ni Dorina ng career para sa kanya? Si Garry wouldn’t do that to her.
Mom: Anak, the heart wants what it wants. You cannot teach your heart to beat for someone if iba talaga tinitibok ng puso.
Anyway, overlooking that part of the movie, I’m just going to say I love Bituing Walang Ningning! Super loved it! And this is considering I didn’t get to watch the entire thing (I missed some parts ‘cos I had to get ready for work).
I hope I can watch it again on PBO one of these days – one where I can sit through the entire thing! I leave you with my favorite scene from the ending part because ahhh the chills it gave me! Also naiyak ako?! LOL! I wanted to give them a standing ovation for this (as though I was actually in their concert)!