Latest movie I watched that is not on Netflix: Can You Keep A Secret? It’s a romantic comedy that’s based on the best-selling novel of the same name authored by one of my favorite authors, Sophie Kinsella. 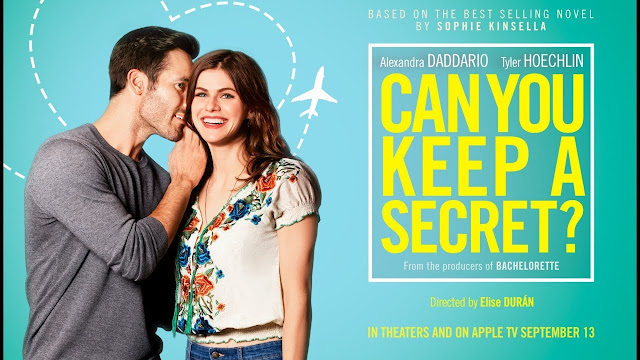 Here’s the plot as provided by Rotten Tomatoes:


The story is about Emma Corrigan played by Alexandra Daddario, a New York City marketing manager who’s stuck in a rut in her professional and romantic life. On her flight back home after a botched client meeting, the plane hits turbulence, prompting Emma to confess all her secrets to the stranger sitting next to her…at least she thought he was a stranger, until she later meets Jack played by Tyler Hoechlin, her company’s handsome CEO, who now knows every humiliating detail about her. Suddenly, Emma’s life is hilariously and embarrassingly turned upside down as she navigates whether telling the truth is the answer to finding love.


I read the book a couple of years back. My GoodReads rating told me I loved it because I rated it 5 star. Actually can’t remember much from the book except well yes the key part that Emma spills the beans of all her secrets to a stranger on a plane who turns out to be her boss. So I won’t compare the movie to the book.

Anyway so I watched the movie and here are what I thought of it:

1. Alessandra Daddario in my book can do no wrong. Loved her from her Percy Jackson days. Even managed to sit through Baywatch because of her. She’s a good actress. So she’s adorable as Emma as all Sophie Kinsella heroines are. Good choice for a lead, Hollywood.

2. Tyler Hoechlin – Helloooo handsome!!! I probably would spill all my secrets to him too if I get seated next to him on a plane that hits turbulence. 😂 Also a good choice for a lead. He pulled off that sexy, older and charming guy look. Just as Jack Harper should be.

3. While I do not feel strongly about this pairing, still, they’re cute together.

4. The supporting characters were changed from the book to the movie and they’re more diverse. Emma’s roommates Lissy and Gemma played by Sunita Mani and Kimiko Glen. Her boss, Cybill, is played by Laverne Cox. But other than the diversity it offered, I didn’t think there was a strong cast of supporting characters. Rommates were annoying (Gemma) and eh (Lissy). I wish there was more of Cybill though.

5. Compared to Confessions of a Shopaholic movie adaption, I like this one way better. Daddario’s acting in trying to be amusing doesn’t go over the top (looking at you Isla Fisher aka Becky Bloomwood). Lead guy – oh heck yes! Tyler Hoechlin all the way! Also in terms of acting, he owned the Jack Harper character. Hugh Dancy as Luke Brandon was just forgettable.

And like I said, at least these two have some chemistry on screen.

6. While it’s far from being one rave worthy romcom, it does have a certain charm to it.

Can You Keep A Secret, movie review, Sophie Kinsella
Share :