I took a break from streaming series to watch this Netflix original film, Love, Guaranteed starring Damon Wayans Jr. and Rachel Leigh Cook. I know Damon most from the TV sitcom My Wife and Kids and Rachel from, well, who can forget the 90s cult classic film, She’s All That?

As the story goes, Susan (Cook) is an earnest and successful lawyer who took on Nick’s (Wayans Jr.) high paying case to save her small firm that’s going under. He wants to sue Love, Guaranteed, a dating website that guarantees love owned by Tamara Taylor (Heather Graham who’s still gorgeous!) who likes to project an image of being a softie but nope, she can play hardball.

Love Guaranteed is all about dating the old school way. Yes! A dating website is old school nowadays, with the proliferation of different dating apps like Tinder and Bumble where all you gotta do is swipe right or swipe left to make a match.

What I Thought of the Film

I certainly thought this was a cute and cozy film based in Seattle. It was a meet cute, the way Susan and Nick meet. She’s ordering a pumpkin spice latte while on the phone and he’s next in line to her, trying to get his own coffee but she’s kinda getting in his way. In a way, it’s also cute that he’s like her knight in shining armor for being an actual paying client.

I loved watching the scenes of Love, Guaranteed, seeing Seattle in autumn, with golden leaves gently falling from the trees and people dressed snugly in their coats to keep them warm on a chilly day. 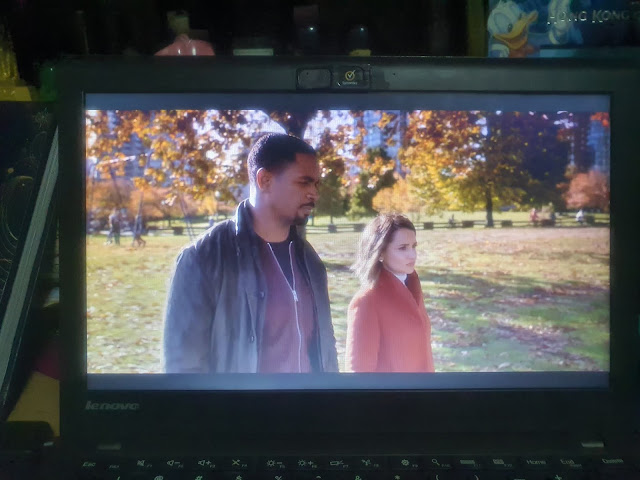 Gosh! I want to experience autumn!

Rachel Leigh Cook is adorable as Susan with her classic car that’s also falling apart. The door handle of her car is broken and so is her car radio that plays Tiffany’s “I Think We’re Alone Now” on repeat because she can’t get the tape out. She lives next door to her sister who is happily married with a good husband, a toddler and another on the way. Her landlord is her brother in law and she lives alone with a fridge stocked full with Chinese takeout food.

Damon Wayans Jr.’s character, Nick, is quite reserved as a guy. He’s an ex-baseball player whose injury took him out of the game and had him working in rehab centers, helping people who cannot afford the cost of physical therapy. But he’s also a guy who once upon a time got his heart broken after his fiancee decided to leave him for another man.

Both attractive and charming. Both are do-gooders. They do deserve love and are perfect match for each other. Though it isn’t the case at the start.

Susan suspected that Nick is a loophole shark and didn’t want to take on his case. He’s gone on 986 dates with Love, Guaranteed website but has not found love. The dating site has a fine print that says you have to go on a 1000 dates to find love. So he wants to sue the company for fraud. “It is reckless endangerment of the heart” he says.

986 dates is a lot! How? Well it’s breakfast, lunch and dinner dates! A guy’s gotta eat, Nick says. And if you wonder how can someone remember all those dates? He names his dates like an episode of Friends: the one who loves cats (but doesn’t own one), the one who brought her parents and such. I thought that was cute and funny at the same time. If I’m to name some of the dates I had gone to, I’d refer to one of my dates as “The One Who was an Emotional Wreck”.

Her wacky assistants, Roberto (Sean Amsing) and Denise (Lisa Durupt) convinced her to get him as a client because hello! Bills! They also convinced her to sign up at the Love, Guaranteed dating site purely for research they said. They even made her profile for her. And what ensues for Susan during this dating research are amusing scenarios that remind me of my own funny and somewhat nightmarish dating experiences. Until of course, Nick who said if he had to name her a date, she would be “The One I Didn’t See Coming” which is certainly heartwarming to hear.

The romantic chemistry here isn’t as strong as what Cook had with Freddie Prince Jr. in She’s All That and no Tiffany’s I Think We’re Alone Now playing in this movie isn’t going to bring all the romantic feels like her teen movie did with Sixpence None the Richer playing in the background. Actually, I thought there wasn’t chemistry between these two if I’m being honest. But it worked anyhow. It’s two people who grew fond of each other and then fell in love.

It may be forgettable in the long run but it’s still entertaining to watch. It’s also just a light watch and drama free which I think is just fine considering all the heaviness 2020 is bringing us. Go on and watch this feel good romantic comedy.

What’s on your watch list these days? If you’re looking for a thriller film, Jupiter Hadley‘s got a recommendation you might want to check out!

Shoe Love and My Fave Celebs in Trouble Paradise